DHS Sec. Mayorkas: ‘Quite Incorrect’ That U.S. Disinformation Board Will Decide What’s True 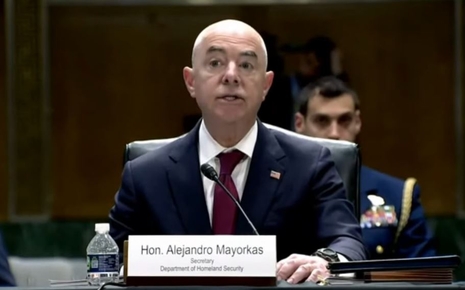 “That is the farthest thing from the truth,” DHS Secretary Alejandro Mayorkas declared Wednesday, when Sen. John Kennedy (R-LA) said that the government’s new Disinformation Governance Board (DGB) will decide, and tell Americans, what constitutes “truth.”

Later, Mayorkas called Kennedy’s characterization of the Disinformation Governance Boards as the Truth Police a “misstatement” and “the farthest thing from the truth”:

“Senator, it is so very important that I correct a misstatement that you made that the Department of Homeland Security is going to be the Truth Police.

”That is the farthest thing from the truth.”

“We address disinformation when it threatens the security of the homeland,” Sec. Mayorkas claimed.

Under Mayorkas, the DHS has declared climate change a threat. "The climate crisis poses a significant threat to both DHS operations and the American people," DHS says in a webpage dedicated to the topic.

Instead of answering yes or no, Sec. Mayorkas simply repeated his claim that the DGB “does not have operational authority or capability,” but merely combats information the government considers a threat to national security.