Google used a blacklist and a blocklist for search results. And those two lists reportedly blocked  a large amount of conservative content from the app — including NewsBusters.

A Google whistleblower, Zachary Vorhies, shared several documents with James O’Keefe and Project Veritas that were released August 14. These documents included a document with a Google Now blacklist and Google block list, and hundreds of other pages of material from internal Google memos, emails, and guidelines. This allegedly impacted the app and not all Google searches.

Google Now was part of Google Search built for Androids and iOS. According to Lifehacker, Google Now put cards, which looked like a smaller version of the discontinued Knowledge Panel, in browsers “to display cards it thinks may be relevant to you at the moment.” While the branding for Google Now has been discontinued, the structure is still a part of the Android Google search. 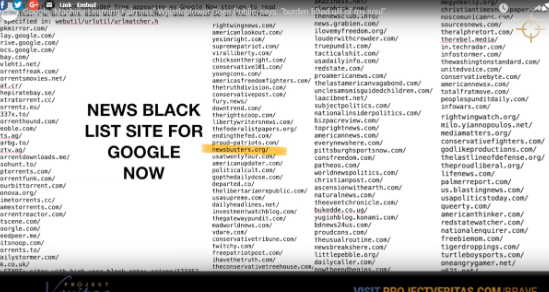 However, if a high number of users blocked CNN, would Google add this mainstream liberal site to the block list?

The list of sites with a high block rate included other places, such as the sites belonging to noted right or right-leaning voices such as Glenn Beck, LTC Allen B. West, USA, (also a senior fellow at MRC), Steven Crowder, the Duggar Family blog, Megyn Kelly, Rush Limbaugh, and Michelle Malkin.

Google has created blacklists and block lists before, for its sister site YouTube. The whistleblower Vorhies released a statement in June showing the manual changes YouTube staff were making to YouTube’s search algorithm to hide pro-life results. A list of blacklisted terms were released to Breitbart as well. These terms included the Irish abortion referendum.

The Media Research Center has contacted Google for comment but the company had not responded as of publication.