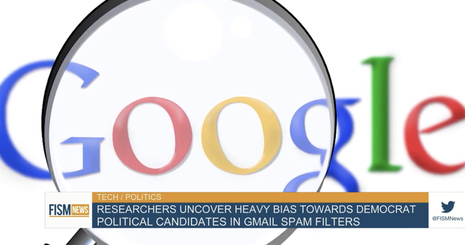 The FEC reportedly downplayed the disparity, citing the same study and arguing that the partisan bias was unintentional and Google’s algorithm simply filters spam, as The Journal wrote. Because Google is always perfectly honest, right FEC? The FEC would seem to be saying that the vast majority of Republican emails are in fact spam, and thus deserve to be filtered out, while almost no Democrat emails are spam. Is that not a partisan bias?

MRC Free Speech America has also conducted studies proving that Google has an anti-Republican bias. For instance, in Oct. 2022, MRC found Google manipulated search results to bury Senate Republican candidates’ campaign websites in key races before the 2022 midterm elections, while highlighting their opponents’ campaign sites in organic search results. Bing and DuckDuckGo produced more neutral results than Google, per the study. Is it really beyond the pale for Google to pull the same shenanigans with Gmail?

As MRC founder and president L. Brent Bozell said, “Google must be investigated for its un-American efforts to sway the election.”

Google, however, celebrated the FEC decision as proof of its political neutrality. “The Commission’s bipartisan decision to dismiss this complaint reaffirms that Gmail does not filter emails for political purposes,” boasted Google spokesman José Castañeda.

There is still a pending GOP lawsuit on the matter in California, though The Journal said the FEC is closing its file. “Google cannot explain away how they’ve overwhelmingly and systematically diverted Republican emails to voters’ spam folders while letting Democrat emails through,” RNC spokesman Nathan Brand said.