Twitter recently removed just one of a slew of threatening tweets from the Chinese government, most of which remain posted on the platform.

A Communist Chinese account posted multiple threatening tweets on Twitter, including the statement, “Pelosi has one foot on the stool of the gallows.” Meanwhile, former President Donald Trump remains banned from Twitter for a supposed risk of inciting violence.

Twitter removed one tweet from a verified account belonging to a Chinese Communist Party (CCP) state media employee, but at least six threatening tweets from CCP state media outlet Global Times remain on the platform. The Communist Chinese state media outlet posted a July 19 “Editorial” tweet that states: “The noose around the neck of the ‘Taiwan independence’ secessionist forces is tightening, and Pelosi has one foot on the stool of the gallows.” The tweet seemingly violates Twitter’s policies on threats. 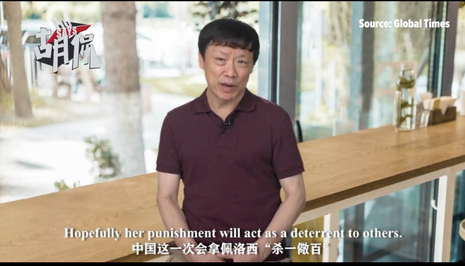 CCP-tied accounts have issued at least seven threats that appear to violate Twitter’s policies since October 2021, including the “gallows” threat aimed at Pelosi and Taiwan prior to the Speaker of the House’s visit to the region on Tuesday.

Global Times also tweeted a threatening video yesterday with a disturbing caption: “The Chinese army will surely eliminate Pelosi’s visit’s consequence through the escalation of military operations. As a result, this will make her dejected and humiliated: Global Times Commentator Hu Xijin#HuSays.”

“The Chinese army, which is fully prepared to handle her possible visit to Taiwan, will surely eliminate her visit’s consequence through the escalation of military operations,” Hu said in the video.  “This is a good timing [sic] for us to punish external supporters of ‘Taiwan independence’ and demonstrate China’s resolution. Hopefully her punishment will act as a deterrent to others.”

The Global Times appeared to threaten Pelosi directly in yet another tweet. The Communist Chinese outlet tweeted that the CCP would “boost the price she has to pay.”

The outlet has been tweeting threats for days. Global Times tweeted last Thursday, “#Opinion: China's remarks on countering #Pelosi's possible visit to #Taiwan shows highest level of warning. All options, including military ones, are already on the table. It's crucial to accurately understand China's remarks and avoid misunderstandings.”

The tweet’s linked article threatened “the use of military force” against the U.S., warning, “If the US insists on going its own way, the Chinese military will never sit idly by.” The tweet with the article remains on Twitter as of the publication of this article.

Global Times has a history of tweeting out violent threats.

One threat was removed by Twitter. “If US fighter jets escort Pelosi’s plane into Taiwan, it is invasion,” Hu Xijin, a commentator for the Chinese Communist Party’s state media Global Times, tweeted Friday. “The PLA [People’s Liberation Army] has the right to forcibly dispel Pelosi’s plane and the US fighter jets, including firing warning shots and making tactical movement of obstruction. If ineffective, then shoot them down.” The tweet was responding to reports that House Speaker Nancy Pelosi (D-CA) was visiting Taiwan.

“Since Taiwan authorities are preparing for war, let's see whether Australia is willing to accompany Taiwan separatist regime to become cannon fodder,” Global Times tweeted in 2021.

Soon after, Global Times also threatened to “wipe them out,” referring to any U.S. troops potentially attempting to defend Taiwan from CCP invasion. Both of these threats remain uncensored on Twitter.