Obama Calls for Speech Crackdown at Int’l Summit: We Must 'Detoxify' from ‘Scourge of Disinformation’

Former President -- and author of the 2013 PolitiFact Lie of the Year -- Barack Obama did not miss the opportunity at the 2022 Copenhagen Democracy Summit to call for more censorship, asserting we must “detoxify our discourse.” 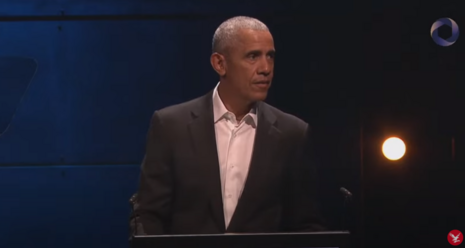 Obama spoke and participated in a panel discussion at the 2022 Copenhagen Democracy Summit. The summit claims that its mission is “[u]niting democratic forces to push back on the authoritarian tide,” but Obama does not seem to view free speech as worth including in that alleged anti-authoritarian push. The former president continued his recent push for increased online censorship by emphasizing the supposed “scourge of disinformation.”

Obama, after saying there’s a need for “holding the powerful to account” and criticizing those who completely scoff at “cancel culture,” made a statement that seemed to imply support for more censorship. “Finally, as we do all these things, uh, we have to take steps to detoxify our discourse, particularly the scourge of disinformation and conspiracy theories [and] hate, uh, online that has polluted our political discourse,” Obama said.

He added that he wants to promote “new ideas” about technology. “It’s going to determine the fate of our democracies, whether they stick, whether they get stronger or whether they continue to get weaker,” Obama said.

During his speech at the Summit, Obama cited a talk he previously gave in April at Stanford University, in which he simultaneously claimed that “freedom of speech” was a core democratic value and hyperbolically said, “People are dying because of misinformation.”

In the Stanford speech, Obama reiterated a previous claim that he was “close to a First Amendment absolutist,” which he also said during an interview by The Atlantic Editor-in-Chief Jeffrey Goldberg at a “disinformation” conference. Obama suggested “modifications” to online anonymity during his interview with Goldberg. In his Stanford speech, Obama again critiqued the “veil of anonymity” that users can have online.

Obama will also be holding a meeting Saturday for over 60 Obama Foundation leaders from across Europe, Politico reported. Obama administration foreign policy advisor Ben Rhodes recently claimed that Jan. 6 is one of the two current greatest manifestations of threats to democracy, according to Politico.

Obama allegedly seeks to fight disinformation now at these events, but  he promised while president that “[i]f you like your health care plan, you can keep it” under the “landmark” Affordable Care Act, or “Obamacare.” But even leftist PolitiFact rated the claim “Pants on Fire” false and called Obama’s statement its 2013 “Lie of the Year.”