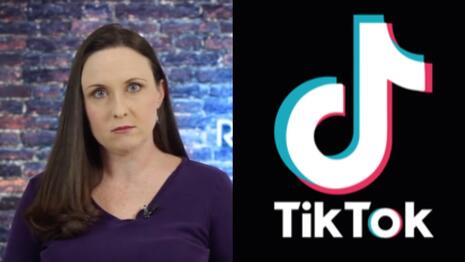 MRC posted an episode of Hughes’ Reality Check web series in which she opined on government response measures to the COVID-19 omicron variant.

TikTok removed the video for “violating Community Guidelines” after it received nearly 58,000 views. The platform erroneously claimed that Hughes’ content violated “applicable laws,” even though U.S. laws protect free speech and inspire the independent thinking that Hughes engaged in.

TikTok informed MRC on Wednesday that an appeal to reinstate the content was unsuccessful, without explaining its reasoning.

TikTok also did not say what statement(s) in the 2-minute, 54-second video it originally found problematic, but Hughes criticized liberal and government reactions to omicron throughout.

Hughes opens the video saying: “Let’s talk about the horrible, super-contagious new variant of the disease that never ends, that the left is now using to call for school closures, extra masks, more vaccine mandates and all manner of insanity.”

The Reality Check censorship is not the only time that Big Tech has censored MRC.

TikTok initially removed a Nov. 5 video of MRCTV and Culture Director Eric Scheiner critiquing the liberal media’s reaction to Republican victories in the 2021 off-year election. MRCTV appealed the decision, and TikTok restored the video within an hour.

And on Oct. 15, TikTok removed an episode of MRC’s CensorTrack With TR, 15 days after it was posted, because of an unexplained “Community Guidelines violation.” In that episode, MRC staff writer/researcher Tierin-Rose Mandelburg discussed censored Project Veritas videos that used a hidden camera to expose insider comments from government employees and Johnson & Johnson.

In Hughes’ censored Reality Check episode, she noted an about-face by Los Angeles schools in requiring teachers to use N95 masks instead of cloth masks, a petition by Chicago teachers to teach from home and considerations by U.S. government bureaucrats to impose a second COVID-19 booster shot.

“Are you people high?” Hughes said during the video. “Aren’t y’all done? Why the addiction to this hysteria? It’s like it’s become the left’s new religion.”

She mentioned that even though omicron cases are rising, COVID-19 deaths are decreasing.

Even as cases jumped 60 percent the last week of December, deaths fell 7 percent to an average of about 1,100 per day, Bloomberg reported.

Beijing-based ByteDance owns TikTok, and the company has an internal group comprising members of the CCP.