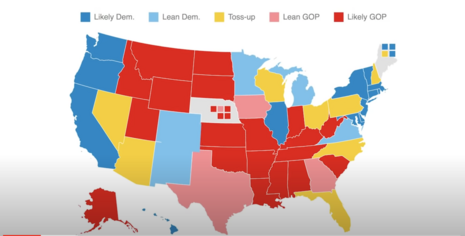 Eleven states, including Arizona, Florida, Ohio, and Texas, have banned or severely restricted private funding. Meanwhile, North Carolina, Louisiana, Pennsylvania, and Wisconsin have vetoed bans–and the writers said this is a big problem.

“The Democratic governors of these states were wrong to issue vetoes,” the writers argued. “Imagine private funding of more police stops, but only in certain neighborhoods, or private funding for tax departments to conduct more audits on certain business types or in certain ZIP Codes. Surely no state would let that happen, so why would they allow it for elections, the cornerstone of democracy?”

For example, Mark Zuckerberg and his wife donated $400 million through the Center for Tech and Civic Life, and the money went to 2,500 counties in 47 states and the District of Columbia. The Center said its goal is to make sure its elections are “safe and reliable,” but the funds overwhelmingly went to areas dominated by President Joe Biden and other Democrats.

The writers said the solution is for more states to ban private funding in 2022.

“More states should ban private funding for elections in their 2022 legislative sessions,” the writers concluded. “Opponents will call this policy fear-mongering and claim that attempts to protect elections are what really undermine the public’s trust. Yet the point isn’t to relitigate the last election, and this dismissive attitude ignores legitimate concerns about private money spent by public bureaucracies in ways that influence voters. As 2020 proved, such funding isn’t transparent, it isn’t accountable, and it isn’t conducive to fair elections.”