A first generation Korean-American chef was banned by Reddit moderators for featuring his beagle snooping behind some Korean barbecue.

The expert chef, who goes by “Turtleramen” on Imgur, posted a thread titled “How my dog got me banned from Reddit's food community.” In it he explained how “I do this thing where I post food pics with my [dog], Pamn. I posted this to Reddit r/food last year with the title ‘Korean BBQ.’ It was my first post to reach the front page. A proud moment... until the mods banned me.”

His posts were wildly popular, but the powers that be specifically targeted him with rules such as forbidding beagles from being featured in the background of food photos. You read that correctly. 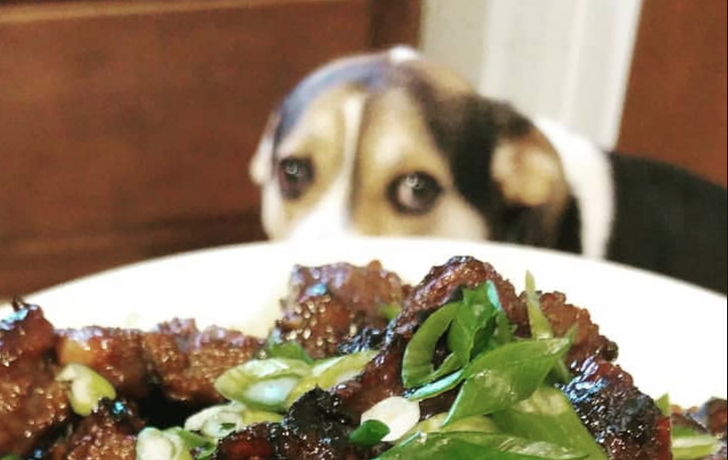 The chef said the problems began by moderators erroneously claiming “that I photoshopped the dog (I didn't).” When this was explained they briefly unbanned him until he was banned yet again on the same day “this time claiming I was ‘naive’ and insensitive to the korean-dogmeat implication (I'm Korean).  To this day they won't let me back in to r/food.”

He resourcefully tried his luck elsewhere on other food related forums on Reddit. He showed a variety of different ways to prepare waffles such as “cornbread waffles and Korean fried chicken.” His posts were wildly popular with the community itself.

“Despite having overwhelming support from the community,” he wrote “the mods began deleting all my waffle posts. This was now the second food subreddit I was banned from.”

One of these food subreddits however seemed to target him specifically when it forbade the use of “background beagles.” “I called out the mods for the new rule,” he recounted that the moderators “all but admitted that the new rule was intended to banish me specifically.”

When he rallied his followers against the absurd rule banning “background beagles,” he attests that “the mods muted them and deleted their comments. Then they started deleting my posts.” While this particular forum on Reddit has not banned him yet “I might as well be with this new rule.”

“Clearly, cooking is a passion of mine. It's presently a hobby, but one day I'd like to make it a career. I used Reddit as a platform to try and kickstart this hobby into something more, which is why it's so disappointing that I've become banned from the three largest food subreddits.”

When reached for comment by Newsbusters TechWatch, he observed that while this is a small incident among many, it shows how perilous the struggle is for free speech on the internet.

“I feel like my circumstance should be cause for concern of a bigger issue, internet censorship” he wrote. “I was banned for evolving and arbitrary rationales, on the whims of overzealous mods who apparently view their role as the moral police.”

While in the big scheme of things he says the consequences of his ban are “minimal,” he expressed concern that “what the mods can do to a food subreddit can be done to anything, including things that actually matter. “

The chef mused on the implications of Big Tech on society, “The internet revolution was a game changer as far as censorship goes. It's not uncommon that many, many folks get their news from sites like Reddit. A small minority of unchecked moderators should not be permitted to unillaterally [sic] decide what gets coverage and what doesn't.”

He can still be followed under the name of @dogmeatsfood on Instagram.