Duke It Out: Twitter Diverts Attention from Smollett to Old John Wayne Interview

Things aren’t going so well at the moment in the culture wars? You went all in on a hate crime that turned out to be a hoax? Your dignified Indian elder Marine veteran wasn’t much of a veteran and the Covington kids did nothing to him? How about the minstrel show in the Virginia Capital?

Take heart, progressives. You can dig up an American icon and knock him down cost-free and with no risk he’ll defend himself! 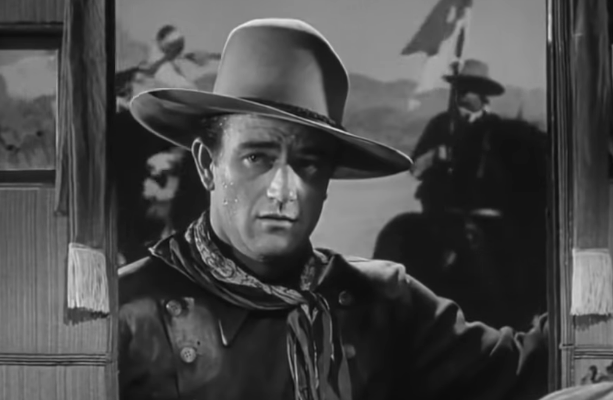 Jussie Smollett’s story may have been fiction, but John Wayne was real and he was conservative. Therefore, he can be vilified. It doesn’t matter that the Duke rode off into the sunset in 1979 -- why not pour a bit of your perpetual outrage in the Wayback Machine and head over to Twitter for some gasping about....a 48 year old interview with the star.

Desperate for something to distract from Smollett, lefties found a new target: John Wayne. Specifically a 1971 interview Wayne did with Playboy.

The Twitter tempest began with a tweet by Matt Williams, a non-verified user. This story was promptly picked up by multiple liberal media outlets and became a trending Twitter moment.

It was elevated two days after it began as a trending Twitter Moment, commenting that “John Wayne's comments on race and sexuality have stirred a fresh debate.” Cultural commentators like film writers Scott Weinberg and Joe Carnahan, as well as comedian Patton Oswalt also hopped on the bandwagon to disparage this American icon.

Some more obscure Twitter uses seemed more incredulous that the interview was gaining so much notoriety today, user Esoteric Jeff commented “Is John Wayne seriously trending on Twitter because some rando rediscovered the 1971 Playboy interview? It's infamous! It's one of the most talked about celebrity interviews in history! How do you ‘rediscover’ it? It's like ‘rediscovering’ the John Lennon Playboy interview.”

Boston College lecturer-in-law Elliot Hamilton responded by tweeting that the Left does this because “when one of their sources of moral outrage gets exposed as a hoax, they have to keep the perpetually outraged preoccupied with something to pound their chest over.” He then added a barb towards the tech establishment that propped it up “See through the mirage and tell @jack to stop stoking it through this crap.”

Conservative commentator Matt Walsh of The Daily Wire added his own tweets to the fray, “So it appears people are randomly getting offended about some comments John Wayne made in an interview half a century ago… John Wayne was born in 1907. Breaking news, folks: every human born in 1907 or earlier had opinions you would find abhorrent today.”

Normally, liberals pull down statues when they get frustrated, but that takes time and energy, and the Smollett sore is stinging right now. The Duke will do in a pinch.