Twitter took action against one account that promoted the false story about Covington students at the March for Life. The social media site also removed some tweets promoting violence, but still allows some verified celebrities’ violent threats to remain online.

Twitter deleted the original account that tweeted the deceptively edited video. But has allowed users to remain on their platform who tweeted calls to violence such as requesting followers to “fire on any of these red hat bitches when you see them. On sight” and “punch him in the nuts and send me the video of it and I’ll send you all my albums on vinyl, autographed." 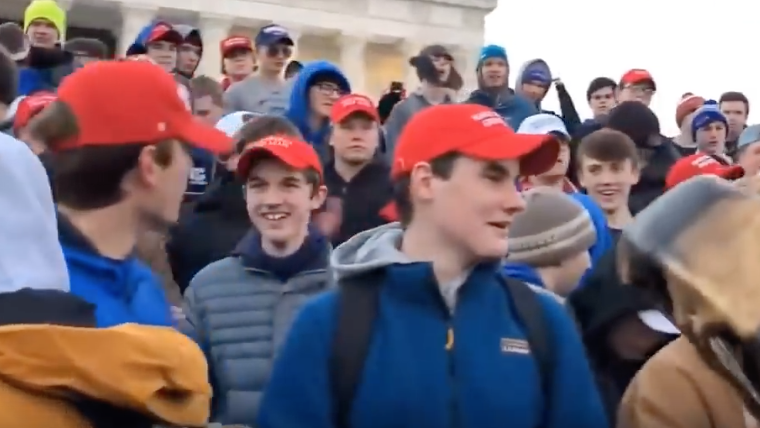 CNN reported Tuesday morning that Twitter suspended the @2020fight account that tweeted the video. Storyful editor Rob McDonagh noted that account itself seemed suspicious, because it featured “highly polarized and yet inconsistent political messaging, the unusually high rate of tweets, and the use of someone else's image in the profile photo." Information warfare researcher Molly McKew also noted that there was a network of anonymous accounts working in concert to spread the video’s reach.

Yet, while Twitter addressed the fake news, it largely turned a blind eye toward the violent, graphic threats levied at the Covington teens.

StreetCorner Music owner Michael Buchanan (@HouseShoes on Twitter) has tweeted multiple calls to violence against the conservative youths.  “IF WE COULD WIPE THESE FAMILIES OUT WE WOULD BE IN A MUCH BETTER PLACE. FUCK THIS SHIT” as well as “LOCK THE KIDS IN THE SCHOOL AND BURN THAT BITCH TO THE GROUND.”

One especially offensive  tweet that was deleted was “If you are a true fan of Shoes I want you to fire on any of these red hat bitches when you see them. On sight.”  He even gloated that Twitter will not ban him and retweeted other people requesting he be penalized just to mock their attempts.

Conservative account Civiltarian posted screencaps showing their attempt to flag his tweets as bannable violations of Twitter conduct with an official response from Twitter that his death threats against conservatives do not violate their rules against abusive behavior.

Ben Hoffman, aka parody Country Western singer Wheeler Walker Jr’s tweet calling for violence has not earned him a ban either. He deleted the tweet on Twitter, but then complained that Instagram deleted his same call for violence on their website. Walker’s call for violence offered signed copies of his albums for any follower who could show video evidence that they punched the Covington MAGA teen Nicholas Sandmann in the groin.

Trump son Donald Trump Jr. has called on Twitter to ban washed-up comedian Kathy Griffin for tweeting, “Name these kids. I want NAMES. Shame them,” and following that with “If you think these fuckers wouldn’t dox you in a heartbeat, think again.”