Following co-host Greg Gutfeld’s opening commentary about Vaughn’s, the media’s reaction to them, and how killers often seek out places where it’s unlikely that anyone will be carrying a gun, Rivera first commented by remarking that “[t]he Second Amendment is most lavishly defended” amendment in “all the Constitution of the United States.”

After Gutfeld asserted that is important since it “defends the First Amendment,” Rivera sought to mock gun rights supporters when he declared that “[a]nybody who thinks they need guns, there's a gun for every man, woman and child in the country to protect against the corrupt and arrogant and pervasive government.”

When Rivera then asked his fellow co-hosts if Vaughn’s statements “remind you of Timothy McVeigh and the militias,” multiple groans were heard and they immediately began shouting in his direction.

Gutfeld emerged from the groans to push back at Rivera and first expressed befuddlement at the comparison: “Oh please – that reminds me of almost all of America and by the way, why would you go straight to McVeigh? Why would you?”

Cut off from continuing, Rivera warned that Americans “are bathing in blood in the civil war that is racking the inner city of this country” and that “[t]he last thing we need now is guns.”

Responding once again, Gutfeld pointed out that many of those shootings Rivera referenced are committed with “illegal guns” by gangs and has nothing to do with the Second Amendment or “law-abiding citizens.” In another swipe, Gutfeld told Rivera that he shouldn’t “play that game with me.”

Rivera continued the debate by emphasizing that “[i]t’s people with guns, please, give me break” and bringing up the rising death toll in Baltimore due to increased violence. When asked by Gutfeld how that’s occurred, the liberal FNC personality stated that it’s because “everyone has a gun and they use them.”

This McVeigh reference is not the first to be uttered by a liberal media personality this week. On Monday, Newsweek’s Nina Burleigh declared that McVeigh’s “ideals” have now become “mainstream” in that they are now held by the Republican Party.

When it came to the major broadcast networks covering Vaughn’s comments, ABC and CBS have ignored them all together while NBC’s Today provided the sole mention in the form of a news brief on Tuesday.

The relevant portion of the transcript from FNC’s The Five on June 2 can be found below.

GREG GUTFELD: The media reactions to Vince Vaughn’s recent Second Amendment defense is as unsurprising as it is fact-free. Piers Morgan, remember him, fulfills the first syllable of Twitter, using that platform to call Vince dumb. The irony’s lost on Piers. Only a dumb person would respond to facts without facts. Piers just showed up to a gunfight with a water pick. Also lost in this, GQ had asked for Vince’s opinion and he gave it, but unlike most stars, he did so with actual facts. No wonder the media freaked out. They had no clue what to make of a star who actually reads, which is why they reacted with flawed surveys, filled with biased calculations, tap the numbers slightly and the research folds like an undercooked crape. But the real stories are the stories that are ignored, like the number of gun owners who prevent attacks or what killer James Holmes said that he wanted to attack an airport, but he nixed it because of all of the guns. That's just like Elliott Roger's manifesto where he said he would skip targets wearing an opposing gun would cut short his killing. He killed six people. They were sitting ducks on purpose and finally, as John La Jr., a gun expert reports, Dylan Klebold, the Columbine ghoul, openly opposed a law letting people carry concealed weapons at schools.  Why would he not like that? Because bad people prefer their victims at their mercy. I.e., unarmed.

GERALDO RIVERA: The Second Amendment is the most lavishly defended of all the Constitution of the United States.

GREG GUTFELD: And it should be, right? Because –

DANA PERINO: Just wait until the B block.

GUTFELD: – it protects all of us. It protects the First Amendment.

RIVERA: Anybody who thinks they need guns, there's a gun for every man, woman and child in the country to protect against the corrupt and arrogant and pervasive government. Is that what he said?

RIVERA: Doesn't that remind you of Timothy McVeigh and the militias, I think it’s totally –

GUTFELD: Oh please – that reminds me of almost all of America and by the way, why would you go straight to McVeigh? Why would you – that would be like if you were protected –

RIVERA: We are bathing in blood in the civil war that is racking the inner city of this country. The last thing we need now is guns.

GUTFELD: That's illegal guns, that’s not the Second Amendment, that’s not law-abiding citizens, Geraldo. That's gangs. You know that gangs. Don’t play that game with me. 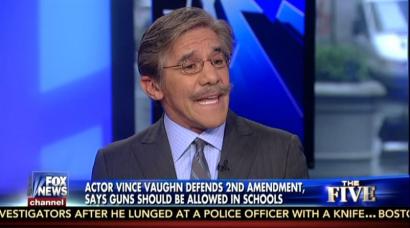 RIVERA: It’s people with guns, please, give me a break. Baltimore? 43 people dead in 30 days.

GUTFELD: So, yes and how did that happen?

GUTFELD: No, no, but those are illegal guns, Geraldo.

RIVERA: Because there’s not stop and frisk. I think that’s another discussion.