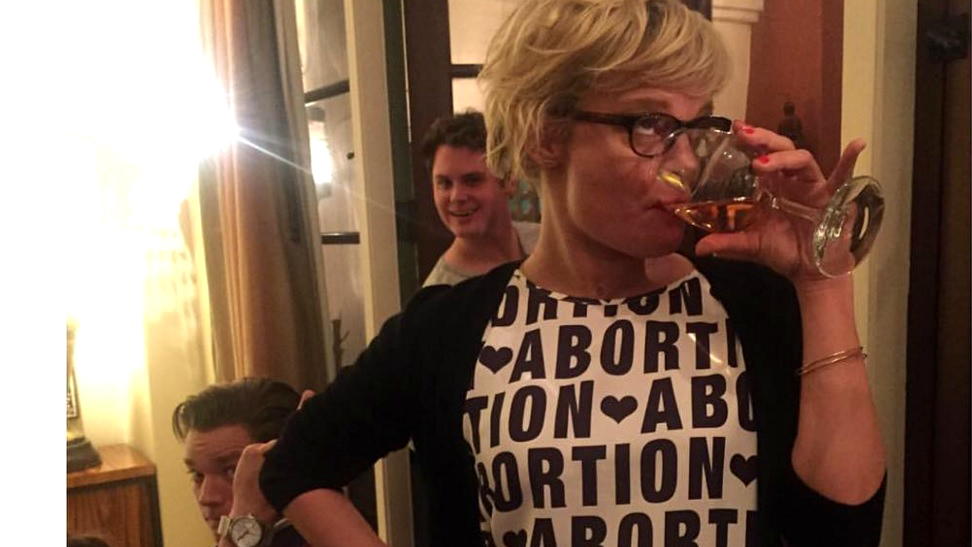 On Sunday, actress Martha Plimpton (The Good Wife, The Real O’Neals) decided to show her support of abortion – through fashion.

The dress is printed with the word “ABORTION” multiple times, along with hearts:

Amelia Bonow, who jumpstarted the Twitter hashtag #ShoutYourAbortion that urges women to share their positive abortion stories online, provided a link in the comments with which to purchase the dress online for $85. According to the site, Bonow designed the dress herself.

While Plimpton received much praise in the comments, some disagreed. In reaction to a picture of the dress posted on RH Reality Check’s Facebook page, a woman named Amanda wrote:

I had an abortion and support a woman's right to privacy, and thus choice. That being said, abortion is a serious choice, and not a fashion commodity. Flippant attitudes about abortion undermine the gravity of that decision, and why it is so important it be protected, and only bolster anti-choice advocates' attitudes that pro-choicer's are casual about the whole thing. This dress is really disturbing, and as someone who is thankful she had the choice, pretty insulting. My choice is not a cutsie fashion statement.

Last year, ABC’s Nightline featured Plimpton in a segment on the #ShoutYourAbortion campaign.

“Abortion is not some crazy weird last resort,” Plimpton said. “It is a normal part of women’s medical lives.”

And she spoke from experience, she said.

“[B]because I did have two abortions as a young woman,” Plimpton recalled in the segment, “I feel that my ability to access that kind of medical care made it possible for me to live out my dreams and do what I really wanted to do with my life.”

In 2014, reacting to the Supreme Court’s decision in the Hobby Lobby case, Plimpton insisted that abortion “reinforces” motherhood. She wrote in a blog post:

It is time we stop pretending that abortion is some anomalous act that is outside the realm of the acceptable and normal. That it somehow damages the family structure or the meaning of motherhood. It does neither of those things. It reinforces them. Anything that strengthens the health and lives of women is good for families.

Plimpton also publicly shares her take on abortion via Twitter:

Both contraception & abortion are moral acts when decided by the individual. Religious freedom means all r free 2 make their OWN decisions.

THIS. Abortion access is good for ALL of us, men included. MANY men benefit from planned parenthood & @PPact https://t.co/vAkOelDzCG

Yes. Women matter more than fetuses. Yes. They do. From @rtraister http://t.co/qVUZlnJdyf

In her latest acting role, Plimpton stars as the Catholic Mother from Hell in ABC's horrid new Dan Savage sitcom, The Real O’Neals (which even the critics hate).