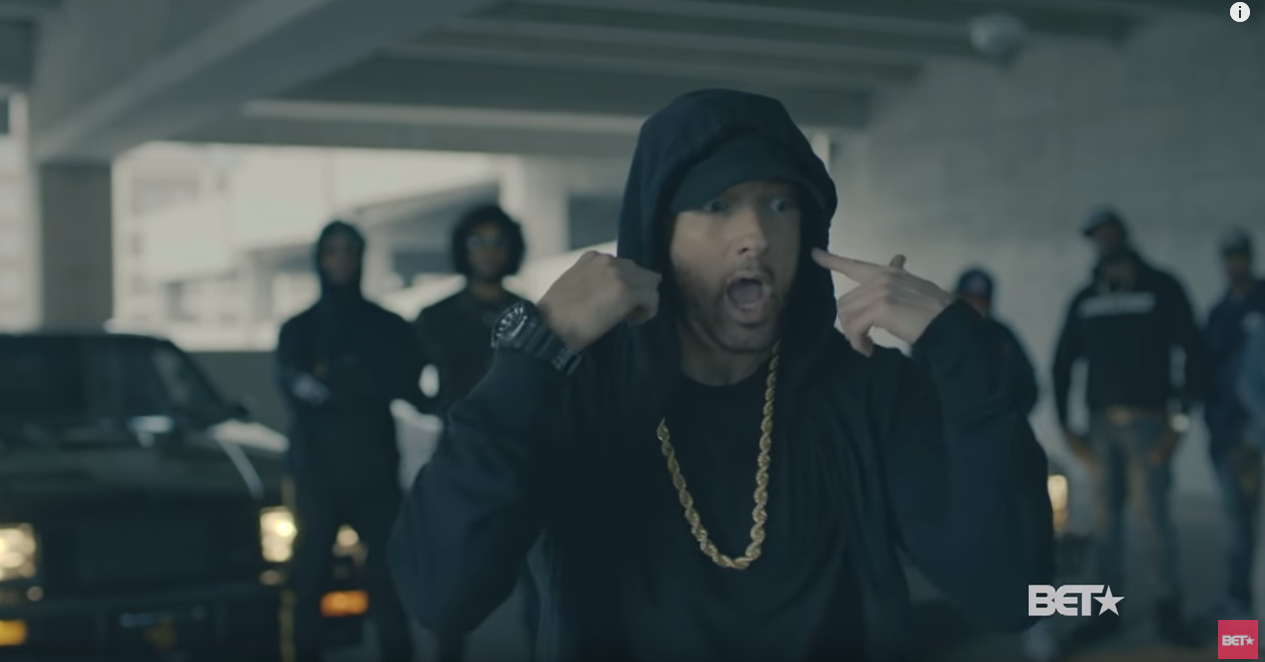 Will masquerading as “woke” and anti-Trump hide the fact that Eminem is a sexist entertainer hell bent on perpetuating the war on women?

The rapper seems to think so. Even though Eminem may pretend to be woke by slamming Trump on his new album, Revival, he still falls into his routine of making violent and misogynist comments directed towards women.

In the wake of the #MeToo movement, Eminem’s effort to find political relevance comes across as hollow and meaningless. And downright phony. The album contains songs like “Framed,” which describes Eminem having Ivanka Trump’s body in the trunk of his car:

“But dog, how the fuck is Ivanka Trump in the trunk of my car?

Must go above and beyond, 'cause it's incumbent upon

Me, 'cause I feel somewhat responsible for the dumb little blonde

Girl, that motherfuckin' baton twirler that got dumped in the pond

Second murder with no recollection of it.”

In the song, “Heat,” Eminem also raps about the one thing he allegedly agrees with Donald Trump about: inappropriately grabbing women.

About the only thing I agree on with Donald is that

So when I put this palm on your cat

Don't snap, it's supposed to get grabbed.”

Whether this lyric is supposed to be tongue in cheek or not, it still doesn’t add up with the rest of Eminem’s album.

Eminem claims to have moved on from rapping about making his ex-wife Kim bleed, but he’s added similar content about other women in his songs. In an interview published in Vulture, an offshoot of New York Magazine, the artist told David Marchese, “I’m not killing Kim on songs anymore--we’re good now.” While he may have figured that out, he’s still apparently fantasizing in lyric format about hitting on famous conservative women. In one song, he raps about hitting on Melania Trump.

“And send it to Mitch McConnell

Just as big of a bitch as Donald—shit's on, bruh!

Let me sing this shit soprano

While I do it pizzicato

Ivanka, stiff arm her while I'm hittin' on Melania

And this song's for all ya.”

In the interview, Eminem spent so much time ranting about Trump that any other information about his current work ended up being buried at the bottom. He launched into a tirade: “He makes my blood boil. I can’t even watch the news anymore because it makes me too stressed out. All jokes aside, all punch lines aside, I’m trying to get a message out there about him. I want our country to be great too, I want it to be the best it can be, but it’s not going to be that with him in charge. I remember when he was first sniffing around politics, I thought, We’ve tried everything else, why not him? Then — and I was watching it live — he had that speech where he said Mexico is sending us rapists and criminals. I got this feeling of what the fuck? From that point on, I knew it was going to be bad with him. What he’s doing putting people against each other is scary fucking shit. His election was such a disappointment to me about the state of the country.”

However, despite Eminem’s attempts to revive his image with Revival, according to a handful of media outlets, the album is a flop. The Guardian attacked him for not being lefty enough: “This new, woke ’Nem hasn’t exactly been doing his intersectionality homework either. His shit-talking to Trump comes laced with the usual misogyny.”  The LA Times started its review with this hilarious quip: “Nobody has ever accused Eminem of having his heart in the right place.”