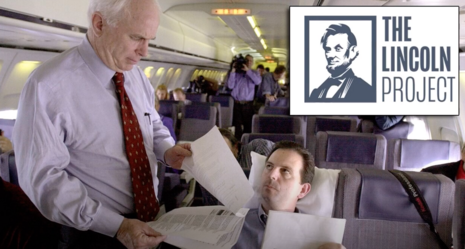 The scandals plaguing the insufferable anti-Trump Lincoln Project have become too potent to ignore for the liberal Associated Press.

AP slammed the group in a story headlined, “How a leading anti-Trump group ignored a crisis in its ranks.” The outlet reported that “[i]n June 2020, members of the organization’s leadership were informed in writing and in subsequent phone calls of at least 10 specific allegations of harassment against co-founder John Weaver, including two involving Lincoln Project employees.”

The AP then went for the jugular, accusing the Lincoln Project of inaction against Weaver. AP also exposed the group for enriching themselves through their contributions:

Despite the early warning, the group took no action against Weaver and pressed forward with its high-profile work. For the collection of GOP consultants and former officials, being anti-Trump was becoming very good for business. Of the $90 million Lincoln Project has raised, more than $50 million has gone to firms controlled by the group’s leaders.

In addition, AP assessed that the inaction against Weaver and the group’s spending practices “raise significant questions about the management of one of the highest-profile antagonists of Trump.” Also, “The revelations threaten the stature of not just the Lincoln Project but the broader coalition of establishment-oriented Republican groups working to excise [former President Donald] Trump from the party.”

But AP wasn’t finished tearing into the Lincoln Project. The outlet noted that since its creation, the group “raised $90 million.” However, “only about a third of the money, roughly $27 million, directly paid for advertisements that aired on broadcast and cable, or appeared online, during the 2020 campaign.” In summary, that leaves “tens of millions of dollars that went toward expenses like production costs, overhead — and exorbitant consulting fees collected by members of the group.” [Emphasis added.]

Campaign finance disclosures obtained by AP revealed that “[t]he vast majority of the cash was split among consulting firms controlled by its founders, including about $27 million paid to a small firm controlled by [Lincoln Project leader Reed] Galen.” In addition, “another $21 million [was] paid to a boutique firm run by former Lincoln Project member Ron Steslow.”

It raises questions about where the rest of the money ultimately went ... Generally speaking, you’d expect to see a major super PAC spend a majority or more of their money on advertisements and that’s not what happened here.

AP said in the beginning of its piece that the group had “tried to claim a higher moral ground in an effort to purge Trump from the GOP.” With AP’s recent reporting, whatever “higher moral ground” the group thought it had has clearly been flushed down the drain.