It must be really hard to have to report a story that flies in the face of CNN’s hype over climate change. 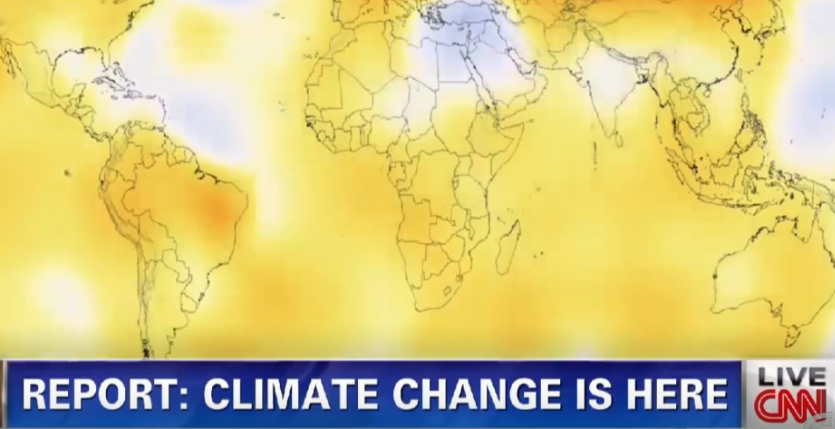 CNN published a Jan. 7, story headlined “Glacier National Park is replacing signs that predicted its glaciers would be gone by 2020,” and admitted that “[i]n 2017, the park was told by the agency [U.S. Geological Survey (USGS)] that the complete melting off of the glaciers was no longer expected to take place so quickly due to changes in the forecast model.” The signs were put up over a decade ago, according to CNN.

But this news didn’t stop CNN from continuing to bang away on their climate change gloom and doom narrative. They immediately tried to qualify their own reporting in a sub-section midway through the piece headlined “Humans are responsible, scientist says” [emphasis added].

CNN proceeded to cite a 2017 study from the same agency [USGS] in an attempt to salvage their liberal talking points:

“‘In several decades they [glaciers] will be mostly gone. They will grow so small that they will disappear. They will certainly be gone before the end of the century,’ Dan Fagre, the study's lead scientist, had said.'And humans are responsible, Fagre said after the study's release.'"

The outlet proceeded to note that “the park isn’t a unique case -- glaciers are shrinking across the globe, experts say” [emphasis added]. Do they just use the phrase “experts say” tongue-in-cheek at this point?

“In Iceland, researchers bid farewell to the first glacier in the country lost to climate change. In a funeral-like gathering, scientists memorialized the glacier, known as Ok, with a plaque that read: "Ok is the first Icelandic glacier to lose its status as a glacier. In the next 200 years, all our glaciers are expected to follow the same path" [emphasis added].

This is propaganda, not news.

Meteorologist and climate researcher Dr. Roy Spencer, cast doubt on the “man-made” climate change scenario in response to the question on his website, “Isn’t the Melting of Arctic Sea Ice Evidence of Warming?”

“Warming, yes…manmade warming, no. Arctic sea ice naturally melts back every summer, but that meltback was observed to reach a peak in 2007. But we have relatively accurate, satellite-based measurements of Arctic (and Antarctic) sea ice only since 1979. It is entirely possible that late summer Arctic Sea ice cover was just as low in the 1920s or 1930s, a period when Arctic thermometer data suggests it was just as warm” [emphasis added].

But if you’re CNN, you’d just be looking to push one side of the story (the climate alarmist side that is), even when your own reporting undercuts your preferred position.