Accuse liberal billionaire George Soros of impropriety and you could be accused of anti-Semitism and be de-platformed. At least that’s what the Open Society Foundations is allegedly saying should happen to lawyer and Fox News guest Joe diGenova. 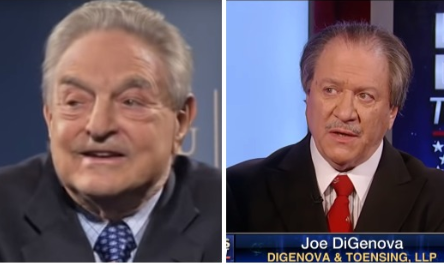 Open Society Foundations President Patrick Gaspard, according to The Washington Post’s Wemple, sent a letter to Fox News CEO Suzanne Scott, wherein Gaspard stated, “I have written to you in the past about the pattern of false information regarding George Soros that is routinely blasted over your network. But even by Fox’s standards, last night’s episode of Lou Dobbs tonight hit a new low.”

Gaspard continued, according to the tweeted letter, “It is bad enough that Mr. Dobbs continues to repeat the widely discredited reporting of John Solomon as it pertains to Soros,” and also quipping, “It’s bad enough that commentators on your air regularly engage in anti-Semitic slurs against Mr. Soros.”

diGenova stated Nov. 13 on Fox Business’ Lou Dobbs Tonight that there was “no doubt that George Soros controls a very large part of the career foreign service of the United States State Department. He also controls the activities of FBI agents overseas who work for NGOs -- work with NGOs.” And Gaspard, in the tweeted letter to Scott, suggested that diGenova stated this “without evidence.”

Gaspard further suggested in the tweeted letter that the claim was “McCarthyite,” stating further that “On behalf of Mr. Soros, founder and chairman of the Open Society Foundations, which I lead, I ask you what attorney Joseph Welch asked of Sen. Joe McCarthy, in one of the darkest chapters in our country’s history: ‘At long last, have you no sense of decency?’”

Gaspard also stated in the tweeted letter, “This is beyond rhetorical ugliness, beyond fiction, beyond ludicrous,” He requested an “on-air retraction” in the letter as well, requesting further that Scott “bar Mr. diGenova as a guest on your network.” He related back to when Fox News had banned Judicial Watch board member Chris Farrell for reportedly claiming in 2018 that the migrant caravan headed to the U.S. southern border was being funded by the “Soros-occupied” State Department, and suggested that Scott “did the right thing” in banning Farrell as a guest.

Finally, in the tweeted letter, he added that Scott should apologize to “the State Department and the FBI as well.”