Washington Post owner Jeff Bezos just solidified himself as one of the biggest climate activist hypocrites in world politics. 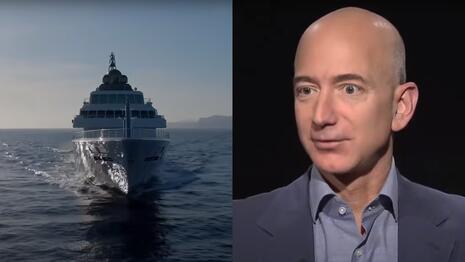 The city of Rotterdam reportedly gave the green light to disassemble one of Netherland’s oldest bridges to make way for the third richest man in the world’s superyacht, according to BBC. Bezos postured himself as an environmental icon for years. In 2020, Bezos made headlines when he pledged $10 billion dollars of his personal wealth to form the Bezos Earth Fund.

The hypocrisy is truly astounding: The Conversation reported that “a superyacht with a permanent crew, helicopter pad, submarines and pools emits about 7,020 tons of C02 a year.” The Environmental Protection Agency found that “[a] typical passenger vehicle emits about 4.6 metric tons of carbon dioxide per year.”

Washington Post reporter Miriam Berger wrote, flatly: “The Dutch company Oceano has been building the massive vessel for an estimated $500 million in the nearby city of Alblasserdam. Once completed this year, the ship, known as Y721, will be the world’s largest sailing yacht, according to Boat International.” Bezos’ previous yacht was reportedly listed for the humble price of “131 million euros ($158 million).”

How large is the superyacht exactly? It’s reportedly a whopping “127 meters (417 feet) long, span[ning] several decks and sport[ing] three enormous masts,” Bloomberg News reported. Bezos’ superyacht is another grossly ostentatious, extravagant symbol of “rules for thee, but not for me,” environmentalism.

City officials in Rotterdam realized that in order for Bezos’ superyacht to “reach the open seas it must first pass through Rotterdam — considered the maritime capital of Europe — and the city’s historic steel bridge, locally known as De Hef, which has a clearance of just over 131 feet,” Berger explained.

Berger did not mention the potential environmental impacts of Bezos’ superyacht. Berger said Bezos “did not immediately respond to requests for comment.”

Bezos has a long history of climate theater.

The Big Tech mogul purchased the rights to Seattle, Washington’s KeyArena and christened it the “Climate Pledge Arena” in June 2020. The name was a “nod to Amazon’s push to get companies to have net-zero carbon emissions by 2040,” according to Bloomberg News. Bezos touted that “[t]he stadium will be the first net-zero carbon certified arena in the world.”

Two months after having made the Climate Pledge announcement, Bezos undercut his own climate credibility. He quietly started a company in 2020 called Fellowship Ventures LLC, which reportedly “limit[ed] transparency into the Earth Fund as LLCs are not required to file publicly available tax documents.”

Just one day after he made his climate pledge, thousands of Amazon employees went on strike and issued a statement, writing, “We applaud Jeff Bezos’ philanthropy, but one hand cannot give what the other is taking away.” The statement criticized the apparent hypocrisy of Amazon funding climate causes while simultaneously funding oil and gas firms.

Conservatives are under attack. Contact The Washington Post at (202) 334-6000 and demand it report fairly on its owner’s climate hypocrisy.