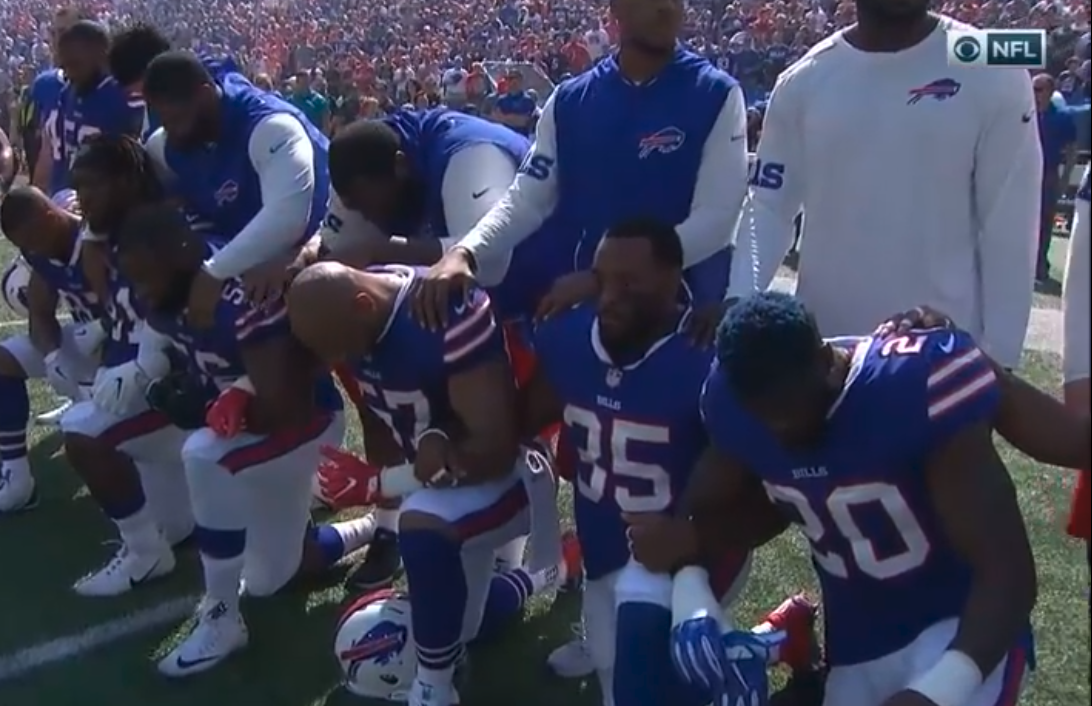 NFL sponsors are feeling pressure to respond after more than 200 players, coaches and team owners knelt in protest during the anthem on the weekend of Sept. 23. While most NFL sponsors have so far not ended their sponsorships, at least three organizations have reacted and others are being pressured.

One company, the Phil Long Ford dealership in Denver, announced it would not renew its sponsorship of Denver Broncos defensive star Von Miller after he knelt during the National Anthem on Sept. 24, Yahoo sports reported.

Phil Long Ford, founded by WWII veteran Phil Long, released a statement saying Miller was a “good person,” but that “when we bring in celebrities to represent us we run the risk of being misrepresented.”

The dealership also reaffirmed its support for a veteran service center founded by its principal owner and concluded, “This would be a great time for our community to show support for our military community by supporting this cause or others that continue to serve them after they serve us.”

Schilling Distributing, a veteran owned company, said in a statement, “while Bud Light has been an official partner of the NFL and New Orleans Saints for years, there is no need for us to ask our retailer partners to promote such controversial organizations to help sell product.” Schilling is instead offering retail items that have statements like “Proud to Serve Those Who Serve” and “This Bud’s for You, Louisiana.”

Other organizations linked to the NFL are also receiving pushback after the protests.

DirectTV is reportedly allowing some users to cancel their Sunday Ticket NFL subscriptions “if they cite players’ national anthem protest as the reason,” The Wall Street Journal reported Sept. 26.

Multiple users contacted The Journal directly to claim they had received refunds and others said the same thing on Twitter.

Update: you can, in fact, cancel your NFL Sunday Ticket with refund through @DIRECTV if you cite the protests as your reason for cancelling.

Cancelled my @DIRECTV NFL ticket this morning. Got a $188.00 credit

DIRECTV is letting us cancel NFL pkg. had to threaten to go with cable. Took half hour of arguing with them. They are getting lots of calls.

Viewers are also canceling their subscriptions to the NFL-owned RedZone channel “which provides live action and scoring from every game on Sundays” because of the protests, The Journal said.

USAA members have been using petitions, USAA forums and Twitter to demand the financial institution pull its NFL sponsorship. According to Tweets and statements from USAA representatives, it does not intent to end its sponsorship.

We have no plans to end our role as the Official Military Appreciation Sponsor of the NFL.

“Our purpose in becoming a league sponsor was to honor and appreciate the military community, and that will continue to be our focus,” a USAA representative wrote on USAA’s Member Community forum.

“Please also know that we’ve contacted the NFL to emphasize the significance of the national anthem and the vital position it plays in acknowledging our country, as well as the men and women who have fought to safeguard our liberties. We have no plans to end our role as the Official Military Appreciation Sponsor of the NFL.”

Other NFL sponsors including Under Armour, Ford, Nike, Hyundai, Anheuser-Busch and Bose have all issued statements supporting both the American flag and the players’ right to free speech, Yahoo Finance reported on Sept. 25. None have withdrawn their support.

NFL sponsors are in a bind because fans both “in favor of and against the protests are sharing the same list of NFL sponsors, calling for a total boycott,” according to a Sept. 25 report by Bloomberg. “Hashtags #BoycottNFLSponsors and #PunchThemInTheWallet are circulating on both pro-Trump and pro-player social media.”

JPMorgan derivatives strategist Shawn Quigg told Bloomberg Markets on Sept. 27 that investors should “bet against CBS Corp. stock ahead of this weekend’s NFL broadcasts” due to the boycott encouraged by President Donald Trump.

Media Research Center President Brent Bozell has also urged fans to “turn off the NFL” on Oct. 1 and to commit to “[o]ne week without football to support our flag.”