Vice Editor: 'Climate Change Denial Should Be A Crime' 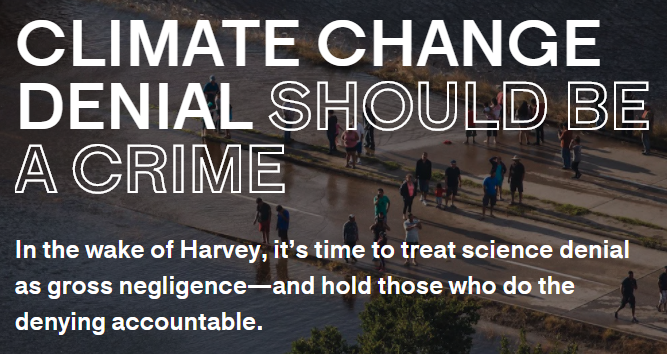 Plenty of media outlets have blamed Hurricane Harvey on climate change, but one journalist used it as an excuse to claim people who don’t agree with him on climate should be punished.

“The science is too clear about what will happen in the near-term to continue to allow profiteers and ideologues to place the public in danger without consequence,” Motherboard editor Brian Merchant wrote Sept. 1. Motherboard is Vice Media’s science and technology outlet.

“Climate change denial should be a crime,” he concluded.

Hurricane Harvey “is what climate change looks like,” Merchant declared. But that claim doesn’t fit with history.

WeatherBell meteorologist Joe Bastardi called out Merchant’s story on twitter, asking “How do you explain so many storms stronger than Harvey, most from over 50 years ago?”

https://t.co/jsVABhuuBR How do you explain so many storms stronger than Harvey, most from over 50 years ago. Ever see this in 1886? explain pic.twitter.com/KSQ5P7PnPQ

Bastardi also pointed out no one denies the “climate changes.”

“Lying like this should be crime,” Bastardi tweeted in reference to Merchant’s story.

The 2,600 word story was filled with over-the-top claims like a “state-sponsored disinformation campaign is putting residents in very real danger,” “Climate change denial can and will leave people dead,” and “Climate change is killing us right now.”

Merchant’s extreme belief that climate “deniers” ought to be punished is not unique. A Grist writer called for “war crimes trials” and a “climate Nuremberg” for climate change skeptics in 2006. He later apologized.

Rhode Island Democrat Senator Sheldon Whitehouse argued in 2015 the government should use the Racketeer Influenced and Corrupt Organizations Act (RICO) to attack the fossil-fuel industry for its climate change “denial operation.”