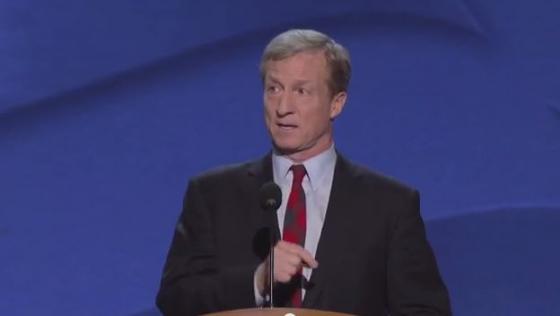 The billionaire told Politico he would spend $7.5 million in eight states this year to teach young voters about “traditional American ways of grass-roots organizing.”

A California billionaire dumping millions of dollars in out-of-state campaigns is the opposite of grassroots. Any athlete can tell you that phony grassroots are called Astroturf. But Steyer and Politico seem to have missed the irony.

The $7.5 million from Steyer is just the beginning. Siders further wrote Steyer “will spend more money organizing young voters in those states in 2018.”

Since Politico’s story was published last week, most major media have ignored it. ABC, CBS and NBC broadcast morning and evening news shows never mentioned Steyer between June 22 and June 29. Neither did The New York Times or The Washington Post.

Steyer was the largest donor in the last two elections, giving $89.8 million to liberals in 2016 and $73.7 million in 2014. His climate change goals were also adopted as part of the official 2016 Democratic Party Platform.

Since President Donald Trump’s election, Steyer has made it abundantly clear he is opposed to the administration. He hyperbolically accused Trump of committing a “traitorous act of war” when he withdrew from the Paris Climate Agreement. Steyer has also repeatedly criticized and opposed the president on Twitter.

Despite his dedication to environmentalism, Steyer made money off of coal investments until June 2014 through Farallon Capital Management, a hedge fund he founded that invested in coal mining and oil and gas companies. Yet in late 2015, Steyer claimed his climate “conversion” came a full 10 years before he divested from coal.