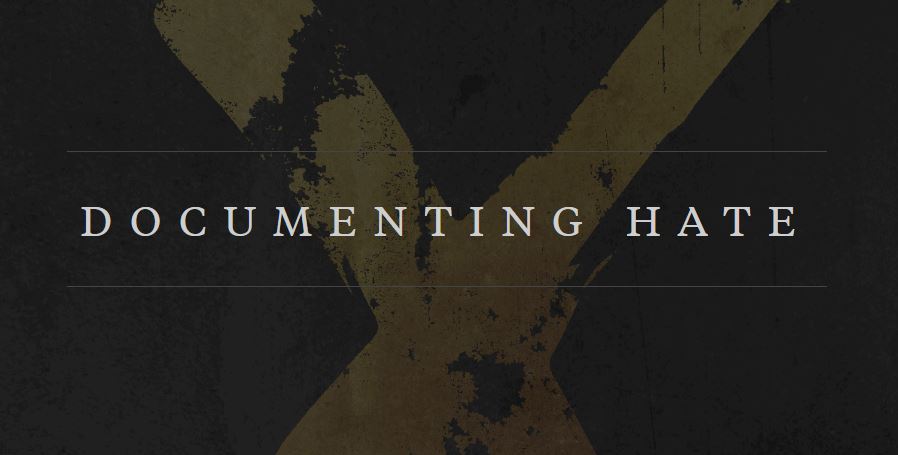 After the election of Donald Trump, liberal groups are banding together to document hate crimes. At least ones that impact liberal victim groups.

ProPublica, a left-wing nonprofit media outlet funded by George Soros, just launched a brand new project called “Documenting Hate.” The website purports to “build authoritative data on hate crimes and bias incidents,” but none of the 21 partner organizations are conservative. Instead, the partner groups the Southern Poverty Law Center (SPLC), Univision, and BuzzFeed, which are overtly hostile to conservatives.

The SPLC not only reportedly inspired a hate crime against Family Research Council in 2013, it also published a bogus “hate crime” study after Donald Trump’s election that ignored at least 2,000 attacks against white students.

Univision’s election response was similarly biased. The week before the presidential election, Univision aired a documentary called “Hate Rising,” designed to show that Trump represented a racist, hate-driven threat to the Latino and immigrant population of the U.S. Haim Saban, Univision’s chairman, was a large donor to the Clinton Foundation and the Clinton campaign.

BuzzFeed showed it knows all about hate in December 2016 when it attacked Christian HGTV stars for attending a church that supported traditional marriage. BuzzFeed openly takes a liberal stance on many things including LGBT issues, policing, Islam, and racism. It’s latest scandal -- publishing an unverified dossier involving Trump -- showed BuzzFeed does not respect journalism ethics.

Yet these are just some of the groups handling future Documenting Hate data. Other media partners include The Root (owned by Univision), New America Media, The New York Times Opinion Section, and WNYC.

Documenting Hate prominently displays a “Tell My Story” form, asking victims or witnesses to self-report “hate” incidents. The project then plans to use the collected data to create “real-time alerts” and “tip sheets” for journalists.

“If you have have been attacked for your race, ethnicity, gender, sexual orientation, trans status, disability, or religion, tell us about it by filling in the form below,” BuzzFeed urged on Jan. 17.

“We are going to use data analysis, social media, and ambitious investigative storytelling to build a better picture of what’s going on,” Documenting Hate tweeted the same day.

4/We are going to use data analysis, social media, and ambitious investigative storytelling to build a better picture of what’s going on.

But ProPublica’s coverage of so called “hate crimes” has so far been one-sided. After the 2016 Presidential Election, ProPublica credited Trump with increasing web traffic on white supremacist websites without considering whether the traffic came from supporters or critics. ProPublica also cited the Southern Poverty Law Center’s bogus hate crime tracking.

Documenting Hate did not respond to MRC’s request for donor information. 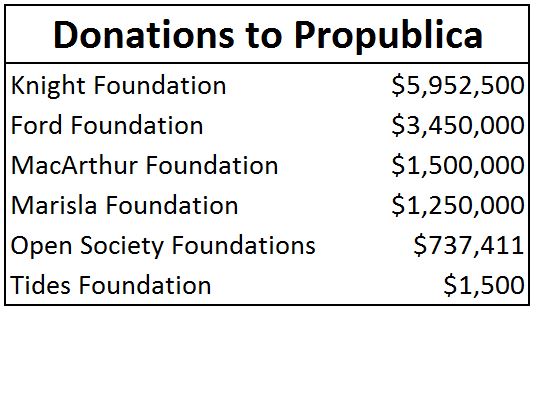 Interestingly, Soros’ Open Society Foundation (OSF) announced at the beginning of January that it would be launching a $10 million anti-hate program in 2017. OSF cited the same Southern Poverty Law Center statistics as ProPublica, and even specifically mentioned “documenting hate incidents through a public, searchable database” that was to launch in late January.

The website “is intended to be the go-to resource for reporters, federal and state agencies, and civil society actors who want to learn about trends and pursue ways to address the problem,” OSF elaborated. However, there is no new information on either the OSF website, or the Documenting Hate website to show these programs are one in the same, despite Documenting Hate launching just 12 days after OSF’s announcement.

Other Documenting Hate partners have also received funding from Soros: 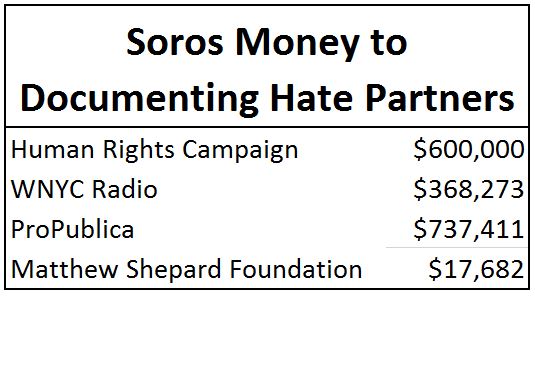