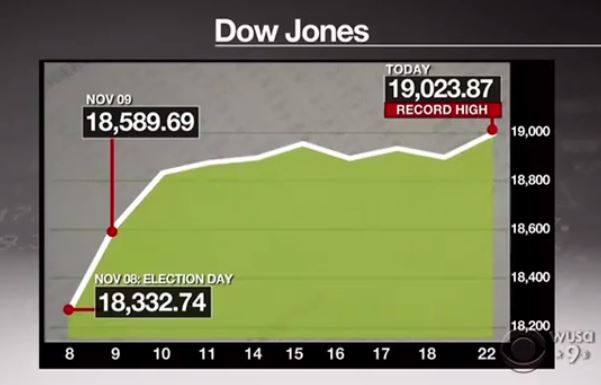 During the week of Thanksgiving stock market investors had much to be thankful for, as the Dow Jones Industrial Average climbed to new record highs for four days in a row. The S&P 500 also reached new all-time highs that week.

While media outlets including CNN Money directly connected President Elect Donald Trump’s victory to the surging stock market and recalled incorrect predictions that his win would cause stocks to plummet, two out of the three broadcast networks didn’t even mention the word Trump. ABC, CBS and NBC evening news programs all failed to recall those panicked predictions about plunging markets.

ABC, NBC, and CBS evening news shows spent just 42 seconds on the soaring markets between Nov. 21 and Nov. 25, as the stock market reached new highs each business day. On Nov. 25, the Dow Jones Industrial Average closed at 19,152.14 for the first time in history.

Although there was little overall coverage, World News Tonight did connect the rally to Trump as anchor Tom Llamas suggested “investors are upbeat about the Trump administration” on Nov. 24. He cited the Dow’s “seven new record highs since the election” as proof.

But World News was the network exception. CBS Evening News and NBC Nightly News chose to be more vague about the “record” gains. On Nov. 22, both referred to it as a “post-election rally,” but refused to name Trump’s victory as a factor.

None of the three news programs bothered to remind viewers of failed pre-election predictions that Trump would cause markets to crash or drop. The New York Times election blog went so far as to say the markets would “never” recover from a Trump win, while MSNBC’s Chris Hayes claimed before the election that global financial markets would fall if “Donald Trump pulls out a victory tonight.”