In the wake of Supreme Court Justice Antonin Scalia’s unfortunate death, several liberal groups — including the media favorite, People for the American Way — are pushing the Obama Administration to quickly nominate a like-minded justice. And the groups all have something in common.

Combined, Soros and the Ford Foundation (not connected to Ford Motor Company) gave at least $50 million, and possibly more, to organizations which hope to push the court further to the left through an Obama appointee.

Liberal media are pushing the same agenda by criticizing the GOP for wanting to delay a nomination. CBS and NBC blasted ‘the Republican roadblock” that they claimed was an attempt to not “follow the Constitution” on Feb. 16. NBC  also gushed that Democrats were “firing back” to support the “ironclad” Constitution.

On Feb. 17, 2016, The New York Times identified six of the liberal organizations behind the push to get an Obama nominee quickly confirmed. Nearly all of the groups, which ranged from People for the American Way to the League of Conservation Voters, have one donor in common: liberal billionaire George Soros (The sixth organization — Americans United for Change — does not disclose its donors). The Ford Foundation has given to at least three of those organizations as well. 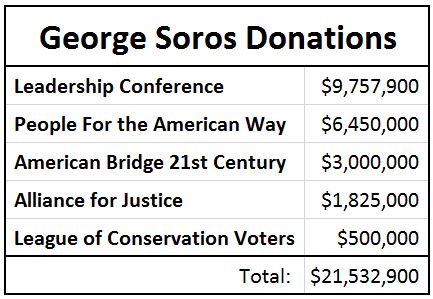 Since 2003, Soros gave $18,032,900 to People for the American Way, The Leadership Conference on Civil and Human Rights, and Alliance for Justice. The Ford Foundation gave an additional $28,907,564 to those same groups during the same time period. 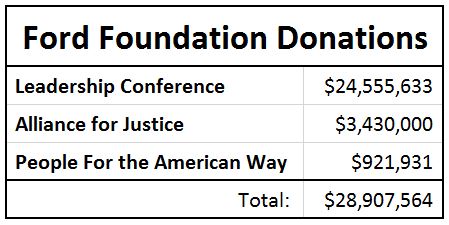 Soros donated an additional $3,500,000 to the liberal American Bridge 21st Century and League of Conservation Voters PACs, which are also pushing for a speedy Obama nomination.

Not only do the groups have overlapping donors, their carefully crafted justice nomination rhetoric was also eerily similar.

Between Feb. 15, and Feb. 19, 2016,  People for the American Way (PFAW), The American Bridge 21st Century PAC, The Leadership Conference on Civil and Human Rights, and the Alliance For Justice (AFJ) all condemned so-called Republican “obstructionists” who would dare object to an Obama Supreme Court justice nominee.

People for the American Way promoted a petition on its website telling senators to “do your job” by considering an Obama nominee. As of Feb. 19, 2016, it had more than 51,000 signatures. PFAW’s reach extends beyond just its readers, because the liberal media regularly turn to PFAW for hit jobs against conservatives. Soros gave PFAW $6,450,000 since 2003.

Alliance for Justice, which has received $1,825,000 from Soros and $3,430,000 from the Ford Foundation, has its own Judicial Selection Project which claims to “ensure our courts are staffed with highly-qualified judges that will safeguard the rights of all Americans… not just the privileged few.”

Nan Aron, president of the AFJ, wrote articles for both The Nation Magazine and The Huffington Post in February 2016 to argue “﻿we already had an election to decide who gets to appoint the next supreme court justice,” and “we fully support President Obama's decision to exercise his constitutional duty to nominate a replacement.”

Aron is not new to supreme court nominee battles. More than 10 years ago, CBS highlighted his liberal criticisms of then-nominee John Roberts.

The Tides Foundation, a liberal dark-money machine, gave $91,296 directly to the AFJ Judicial Selection Project in 2011 and 2012.

The president of The Leadership Conference on Civil and Human Rights, Wade Henderson, issued a press release on Feb. 17, stating “The work of the United States Supreme Court is too important to the nation to allow a vacancy to go unfilled for an extended period of time.” Henderson went on to claim that Republicans in the senate are ”taking obstruction to new heights of cynicism and are flirting with a constitutional crisis of their own making.”

In 2012, the media appealed to Henderson to slam Republicans.

Soros also gave $3,000,000 to the American Bridge 21st Century PAC, which took a new angle on slamming every GOP candidate by telling “obstructionist” Republicans in Congress to “step aside” and make room for senators who would approve an Obama nominee.

Finally, The League of Conservation Voters, which rarely involves itself in the justice nomination process, has been actively contacting its 1.5 million members, asking them to push their senators to approve Obama’s nominee, according to The New York Times.

“It’s hugely important that the president nominate someone and the Senate acts. We will be more engaged in this effort than we ever have before in a Supreme Court nomination,” the league’s president, Gene Karpinski told The Times.