The things you learn watching HuffPost Live! For instance, did you know the Vatican’s art collection is gay enough and dirty enough to earn an NEA grant?

That’s the kind of information you pick up from a HuffPost Live interview of a gay ex-Catholic priest, a lesbian activist, and a Yahoo editor.

The interview began with a discussion of the artwork in the Vatican.  Ex-priest Tony Adams, but the gist is that “if you go into the Sistine Chapel, you’re in the presence of something done by a gay man that could be described in many camps as high-end pornography.” 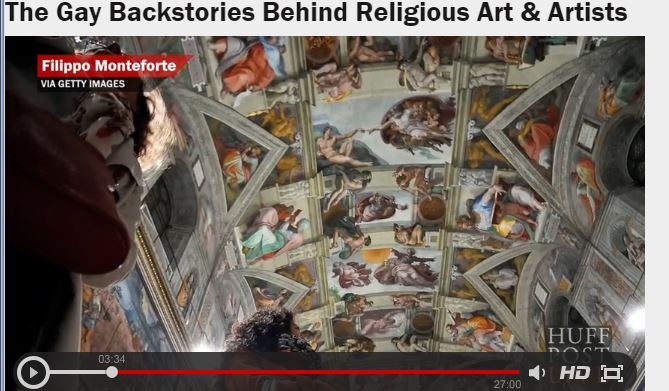 He added to this, “In the Vatican museum, you can’t take five steps in any direction without tripping over a penis or an exposed breast or a fleshy thigh.” Has this guy ever heard of Renaissance art? Man in his natural state? But the Sistine Chapel is definitely just a statement about gay sex, no doubt about it.

“A cloistered environment of gay men” … they’re presumably talking about men who have taken life-long vows of chastity, like the cardinals, the bishops, and the Pope, whose sexuality Monroe addressed specifically.

“He’s not gay-friendly, if anything, um, I would go so far, Tony, as to say that he too might be closeted as so many of the others have been.”

So this is the logic: if you’re not popping champagne and tossing glitter over homosexuality, you must be a closeted gay person, like the Pope and all the cardinals, bishops, and priests in the Catholic Church. Totally makes sense.

Cue commentary on the Church’s “hypocrisy.”

Adams explained, “It’s a religion built on denial and repression and desire and claims unfulfilled sexuality.”

Interviewer Caroline Modarressy-Tehrani added, “You have those, very, sort of Catholic Church purists, traditionalists, who are, on the one hand, sort of pushing you to be upholding the conservative values that they feel comfortable with, and they’re sort of stuck in the past.”

Got it. Conservative values are recalcitrant, stuck in the past, and incredibly backward. Which really is a compliment coming from this crowd.

Still, Adams assured HuffPost Live viewers, “if they [Catholics] don't change, they are going to wither and die.”

Well, at least they enjoyed the art.