By Robert Knight | November 26, 2008 12:00 AM EST
The Washington Post's religion maven advises the Obamas on the perfect church to attend.

By Robert Knight | November 6, 2008 12:00 AM EST
Conservative values still resonate with the public. Obama ran to the right of McCain on social and fiscal issues, and the media ignored the contradictions to his record. 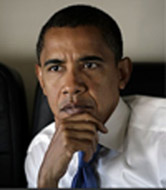 If a picture is worth a thousand words, then the Nov. 3 edition of Time magazine just gave Barack Obama 13,000 words to a few hundred for John McCain. Starting with a corner shot on the cover, Obama is pictured 13 times throughout the magazine.

The only photo of his opponent in this election-eve issue is a goofy thumbnail of McCain under the Gaffes section of the Campaign Scorecard. Sarah Palin is featured exactly once, also, in the letters section under a quote from a reader who compares her to impersonator Tina Fey and says "They are both better entertainers than politicians."

As a well-documented member of Obama's adoring media paparazzi, Time seems to be competing with the TV networks for "most obsequious." According to a new CMI study, CBS, ABC and NBC ran 69 segments about Palin around the time of the vice presidential debate, of which only two were positive, 37 were negative and the rest neutral. But Time seems intent on outdoing them. This edition is so pro-Obama that it verges on a Mad magazine parody. The Obama pics are scattered through the first half of the magazine, amidst fawning features such as Joe Klein's "Why He's Winning." That piece, which was thoroughly crunched by MRC's Tim Graham in an Oct. 23 Newsbusters post, has a page and a half color photo of Obama surrounded by an adoring crowd. The next page shows Obama in a helicopter, with the facing page a portrait of Obama, chin in hand, looking positively regal.

By Robert Knight | October 8, 2008 12:00 AM EDT
While every question addressed policy issues, nearly a third also revealed the character of the candidates.

How 25 Years of Gay Activism in Hollywood Has Paid Off

By Robert Knight | October 8, 2008 12:00 AM EDT
This season, a record number of broadcast television series are featuring sympathetic homosexual characters.

By Robert Knight | October 1, 2008 12:00 AM EDT
Media sharpen the knives for that one error in the vice presidential debate.

McCain's ad says Barack Obama's "one accomplishment" as a state senator was "legislation to teach ‘comprehensive sex education' to kindergarteners."

Toobin listed it among several "outright falsehoods" from McCain, and Borger claimed the Obama-backed bill was "about teaching children to recognize sexual predators."

The Obama camp and many media have repeated the line that the bill was only about protecting kids from sexual predators. But the McCain ad is correct. The bill, SB 99, is a radical expansion of sex education, ratcheting down the initiation age from sixth grade to kindergarten, and eliminating moral language that supports marriage and abstinence. Only a tiny portion of the bill addresses how kids can be protected from unwanted sexual advances.

By Robert Knight | August 8, 2008 10:51 AM EDT
Five years ago, The Washington Post's Ceci Connolly did a front-page smear of Christian AIDS activist Jerry Thacker, who had been appointed to the presidential AIDS commission. The headline? "AIDS Panel Choice Wrote of a ‘Gay Plague.'"

Thacker, who is HIV-positive himself, had merely written on his Website that health authorities and journalists had used the term "gay plague" during the early 1980s. Amid a media firestorm, he withdrew his nomination the next day.

Fast forward to Connolly's lede in the August 7, A-2 story "Early Lessons Forgotten, AIDS Conference Told," on the International AIDS Conference's finding that HIV/AIDS is skyrocketing largely because of homosexual sex. Connolly describes AIDS in a similar way to how Thacker put it:

By Robert Knight | August 5, 2008 12:00 AM EDT
The treatment is in stark contrast to typical media calls for more gun control.

"Liberal Dedication in the Face of Hatred" was the lead teaser on the front page of the print edition of the Washington Post's Metro section on August 2. Inside, staff writer Jacqueline Salmon reported on Unitarian Universalist vigils held in the wake of the July 27 shooting in a Unitarian church in Knoxville, Tenn. in which two died and seven were wounded.

Salmon noted the Knoxville police chief's assertion that the shooter "hated the liberal movement." This corroborated other media reports about a letter that the shooter had left in which he expresses a visceral antipathy to liberals.

Salmon moved on to report about a gathering on July 28 at a Unitarian Congregation of Fairfax in Oakton, Va.: "Bill Welch, the congregation's minister for programs, talked about how isolating it can be to be a liberal in today's world of right-wing talk radio and conservative Christians ‘that talk about liberals as if we are bad people.'"

Salmon did not bother to quote a talk radio host or Christian conservative in response to the minister's broad-brushed charge. Nor did Salmon bother to acknowledge that the shooter at the Unitarian church, Jim Adkisson, had also rejected conservative Christianity. One of Adkisson's neighbors told The New York Times: "[Adkisson] said if you read the whole Bible, everything in it contradicts itself." Salmon didn't even bother to challenge the dubious proposition that "right-wing talk radio" is "isolating" liberals, when most major media are dominated by liberals, as documented in the new Culture and Media Institute Special Report, "Unmasking the Myths Behind the Fairness Doctrine."

By Robert Knight | August 4, 2008 12:00 AM EDT
Given the Post's one-sided account, could the paper be contributing to a climate of hate against conservative talkers and orthodox religious believers?

By Robert Knight | July 25, 2008 5:00 PM EDT
CMI Director Robert Knight exposes the medias outright advocacy of open homosexuality in the military, and rebuts one columnists vicious personal attack on an expert who supports the gay ban.

A Lady Under Fire

By Robert Knight | July 25, 2008 12:00 AM EDT
A Washington Post columnist claims a supporter of the ban on gays in the military exhibited rage in Congressional testimony -- but The Hill reveals that the rage was on the other side.

NBC Marches in Lockstep with Gay Agenda for the Military

By Robert Knight | July 24, 2008 2:20 PM EDT
NBC outdid itself in promoting the pro-gay view in its Nightly News coverage Wednesday of a hearing held by the House Armed Services Committee's subcommittee on personnel. NBC served up a litany of gay "victims" of the military's ban on open homosexuality, plus pro-gay congressmen, and played up a recent poll showing most Americans wanting to overturn the ban.

NBC cited only one pro-ban witness, a retired Army Ranger sergeant who got 3 seconds of airtime in the 2:39 segment. Elaine Donnelly of the Center for Military Readiness, who gave a detailed testimony supporting the ban, was not featured at all. The sergeant's statement, by the way, was immediately and angrily refuted by a veteran Army officer now in Congress.

Narrated by Pentagon correspondent Jim Miklaszewski, the piece begins with lesbian retired Navy Capt. Joan Darrah walking along a country path with her partner and a Frisbee-catching dog. She gives heartfelt testimony. Next comes retired Marine Sgt. Eric Alva, who lost a leg in Iraq and has been featured on other newscasts as the face of gay soldiering. Alva is shown with his prosthetic leg, in full uniform, and then testifying. Rep. Chris Shays (R-Conn.), proclaims the gay ban "unpatriotic" and "cruel."