P.J. Gladnick is a freelance writer and creator of the DUmmie FUnnies blog.

I am probably the only writer on NewsBusters to have received an award from the Soviet Union. It was for my work as an American correspondent for Krokodil Magazine which you can see chronicled in I Was A Commie Writer.

I live in South Florida which is full of eccentrics which is why I feel right at home here. My main accomplishments in life were winning a bottle of aftershave when I was eight and having the biggest PING List (over 1000 Pingees) on the Free Republic forum for my DUmmie FUnnies blog. This is fortunate since I suffer severely from Ping List Envy.

Prior to the advent of the Web, I wrote a syndicated humor column that appeared in dozens of newspapers throughout North America. Only complete humility forbids me from telling you that my columns appeared in the Houston Chronicle, St. Petersburg Times, L.A Herald-Examiner, Winnipeg Free Press, Cleveland Plain Dealer, Vancouver Sun, and lots of other periodicals that I am much to humble to list.

Oh, I also produced an award-winning satirical comix website called PJ's Comix. This sort of balances out the fact that I am the WORST basketball player in the world.

My frequent commentaries (or rantings for those who don't appreciate me) can be found at my DUmmie FUnnies YouTube Channel.

A firestorm of leftwing outrage erupted on Friday on the heels of an announcement by the Hillary Clinton campaign that morning that she now wants the Michigan and Florida Democrat delegates to be seated at the convention this summer despite the fact that those delegates had been stripped by the DNC because those states had moved their primary dates up:

Although former U.S. Congressman, Joseph Kennedy III has been criticized for his Citgo commercial last year promoting discount heating oil provided by the Hugo Chavez Venezuelan government as a PR ploy, his latest commercial goes way beyond mere syrupy praise. Kennedy is now using the most recent Citgo commercial as a launchpad to blast the U.S.

We have seen Chris Matthews drool over her on live television but he might have second thoughts after reading the extensive shopping list of CNBC's Street Signs anchor, Erin Burnett. Her expensive list of things she wants from suitors was published in Men's Health as 8 Ways to Impress Me. None of the ways in which one can impress Erin has anything to do with personality. It all comes down to spending big bucks on Erin as you can see from her list:

1. Pack Your Bags
Any guy who can plan a trip to an exotic locale, such as Mongolia, Mozambique, or Papua New Guinea, would impress me.
2. Buy Me a New Atlas and Globe
You could unlock my heart by allowing me to dream up my next trip. I love to travel, and hope to eventually set foot in 100 countries. I have many more to go.
3. Do Something Special for My Parents
Family is important to me, so round-trip business-class tickets to Australia and New Zealand for my parents would earn you big points in my book.

In what looks like an editorial authored by one of the more extreme members of the Democratic Underground, the New York Times ended the year with a rabid leftwing rant that among other things accused American soldiers of war crimes on a large scale:

In what seems to be an almost comical pattern among South Florida newspapers, the Fort Lauderdale Sun-Sentinel has once again failed to apply the political party label to disgraced and imprisoned former Broward county sheriff Ken Jenne. Can you guess the political party to which Jenne belongs? I'll give you a hint. It is the big D.

A Huffington Post blog, "Hillary As An Agent of Change," authored by Derek Shearer was posted yesterday to reassure the "progressives" that Hillary Clinton is really one of their own. Despite the common view among the left that Hillary is a status quo type, Shearer lets us know that she is really quite liberal as you can see in these excerpts:

... Hillary would be a strong leader who manages change in the public interest-at home and abroad--in the manner of FDR or Harry Truman. She is, in fact, the true heir to the New Deal tradition of the Democratic Party, but for a new era.

CBS News has discovered a dire new dirty political tactic. It is called "bundling." No, not the bundling of campaign funds as was performed by Norman Hsu for Hillary Clinton. This new bundling reported by CBS involves allowing ballot petition initiatives to be "bundled" together by signature collectors. CBS has presented the fact that signature collectors in California are collecting signatures on the initative to allow district allocation of that state's Electoral College votes simultaneously with the collection of signatures for other ballot iniatives as some sort of dirty trick. They even have a video showing this "sneaky" practice that has been used for decades when collecting signatures for ballot initiatives. The bundling section of this video was provided to them by a member of the Daily Kos named E Love who made his own laughable video about this newly discovered dirty trick.

Typical of CBS, this video highlights this "dirty trick" of both "bundling" ballot initatives and attempting to make the electoral votes in California more proportional to the popular election results while allowing only a brief one sentence response by a Republican in this report. Some unintentional humor in this report comes to us via the hysterical melodramatics of Rick Jacobs the head of the Courage Campaign who opposes this iniative. He apparently thinks it is outrageous for an initiative to increase funding for childrens hospitals to be allowed to be "bundled" together with the electoral college initiative:

LAT Frets Romney May Be Too Perfect

You would think a candidate has to worry that a media outlet might find some sort of problem in his background that might harm his campaign. Right? In the case of Mitt Romney, it appears that his "problem" is that he is too perfect according to the Los Angeles Times. Romney's perfection "problem" is described in a Nov. 24 article, "Does perfection have its price for Romney?"

Mitt Romney arrives at his campaign headquarters here 10 minutes early, a knife-blade crease in his khakis, winter tan, lots of hair, all of it in place. He skips the coffee and doughnuts in favor of skim milk and the home-baked granola sent along in a zip-lock baggie by his wife. That's Ann, his high school sweetheart -- the mother of his five handsome sons -- with whom he says he has never had a serious argument in 38 years of marriage.

Perhaps nothing better illustrates the mental divide between left and right in this country than the starkly different reactions to the Newsweek blogs of new columnists, Markos Moulitsas and Karl Rove.

What do you do when your heavily hyped book plummets from number 6 on the New York Times bestseller list to a mere 299 on Amazon.com in just a matter of a few weeks? If you're Valerie Plame, you turn to discredited "journalist" Jason Leopold for self-hype help as you can see in this video. Howard Kurtz has written of Leopold's dubious background in a March 9, 2005 Washington Post article:

Jason Leopold got a journalistic black eye three years ago when Salon retracted a story the freelancer had written about a Bush administration official, saying it could not authenticate the piece.

Now the former Los Angeles Times and Dow Jones reporter has written a book, "Off the Record," that criticizes journalists as lazy. Oh, and by the way, Leopold says he engaged in "lying, cheating and backstabbing," is a former cocaine addict, served time for grand larceny, repeatedly tried to kill himself and has battled mental illness his whole life.

Reaction of the Left to 'The Insanity of Bush Hatred' Article Demonstrates...Insanity

A very interesting article appeared in yesterday's Wall Street Journal titled, "The Insanity of Bush Hatred." Author Peter Berkowitz stated that even many normally rational members of the left are completely overcome by their absolute hatred of Bush to such an extent that it borders on insanity: 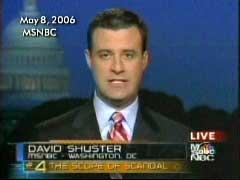 Now that Rosie O'Donnell is out of the running as host of a prime time MSNBC show, speculation has started anew about who will be named to host the program. Among the more amusing of these speculations come from Cenk Uygur, host of an Air America morning show.

Fresh off her recent assault in which many suspect the culprit to have been 14 Bloody Marys, Air America radio talk host Randi Rhodes has now wandered into Moonbat conspiracy territory with her suggestion that Blackwater was the the cause of the current wildfires in California. Here is a partial transcript (audio available here) of what Randi said on the air on Wednesday:

I started just doing Google searches to try and figure out. You know, arson, arson, it was like crazy trying to figure out why is that being downplayed? Why is that, you know, just a small part of the story? And you know, every time I look for it what comes up, believe it or not, is that Blackwater wants to move to San Diego and build this giant complex in San Diego right where most of the evacuations are taking place and you know.

You just know wherever there is fire, this administration will be out there doing what it does best and that is fanning the flames, you know. It just spooks me, I can’t explain to you how creepy this whole thing is that you know, you’ve got these fires. Some of them are thought to be the work of arsonists and in the same breath you’ve got a community that’s on fire that just recently protested Blackwater West. Just recently said no to Blackwater and apparently you don’t do that.

In a bigtime case of the pot calling the kettle black, liberal talk radio host Ed Schultz is attacking the credibility of Air America radio host Randi Rhodes concerning her highly dubious story about her non-mugging last Sunday outside an Irish bar in New York.

As reported here in NewsBusters yesterday, liberals immediately began blaming conservatives for the supposed mugging of Air America talk show host Randi Rhodes on a New York street. After much blame cast in the leftwing blogosphere against evil rightwing muggers as the culprits, it turned out that there was no mugging in the first place. Supposedly it was just an accident.

With many newspapers in a state of free-fall as far as their readership numbers go, it is interesting as well as entertaining to watch how they attempt to combat that situation. In the case of some such as my hometown newspaper, the Fort Lauderdale Sun-Sentinel, the effort to adjust to the new realities of the Web is both awkward as well as laughable.

Dan Rather in Real Life Form Over Substance Comedy Skit

It looks like a comedy skit about a shallow network anchorman who emphasizes form to the total exclusion of substance. However, if you look closely at the featured player in this video, you will see that he is not portrayed by a comedy actor. Instead it is the real life Dan Rather playing himself as a CBS News anchorman completely obsessed by his on-camera appearance.

What is Arthur "Pinch" Sulzberger's main qualification for being publisher of the New York Times? According to Huffington Post blogger, John Ridley, it is living through birth.

Dan Rather Lawsuit Receives Little Support in the MSM

With a few notable exceptions such as Tom Shales, Dan Rather's $70 million lawsuit against CBS is getting almost no support from his fellow journalists in the mainstream media. The MSM attitudes towards Rather and his lawsuit range from sad to downright brutal.