BMI's Dan Gainor Appears on 'Fox and Friends' to Discuss 'If You Were a Terrorist...' Blog at NY Times

Business & Media Institute director Dan Gainor appeared on "Fox and Friends" this morning to talk about a blog posting by Freakanomics blogger Steven D. Levitt that asked, "If You Were a Terrorist, How Would You Attack?"

"This from the media right after they were criticizing how Rupert Murdoch might run The Wall Street Journal. Why doesn't anyone in the mainstream media criticize how The New York Times is run by Arthur Sulzberger," Gainor told Fox News Channel viewers.

Gainor also pointed out that Levitt was trying, "to get as much possible press...and The New York Times is loving it."

NYT Blogger: 'If You Were a Terrorist, How Would You Attack?'

Blogger Steven D. Levitt asked his readers to imagine themselves as terrorists today and come up with their own ways of "maximizing terror" at the new home of the Freakonomics blog, The New York Times website. Levitt speaks:

Hearing about these [airline restriction] rules got me thinking about what I would do to maximize terror if I were a terrorist with limited resources. I’d start by thinking about what really inspires fear...Also, I’d want to create the feeling that an army of terrorists exists, which I’d accomplish by pulling off multiple attacks at once, and then following them up with more shortly thereafter.

How do you increase readership at a business magazine? Assume your readers are criminals.

The blogoshpere is full of opinions, but this one you're paying for. Your tax dollars are going to National Public Radio Blogger and Morning Edition commentator John Ridley to editorialize "I'm sorry, but chick fights are sexy" in his new blog on the NPR website called “Visible Man”, which will appear twice a week. Ridley chimes in on why he likes Elizabeth Edwards for his first post:

TheDaily Brief, one of the blogs for the new Conde-Nast business magazine Portfolio, took some jabs June 1 at their target audience, businessmen, by comparing them to, “bitter banker” Mr. Potter in the movie “It’s A Wonderful Life”. The typical bias came courtesy of Megan Barnett, News Editor of Portfolio, who said: 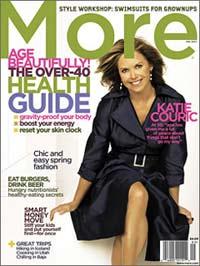 CBS "Evening News" anchor Katie Couric is profiled in More magazine this month by Amy Wilentz in a piece called, “Katie’s Leap Year” highlighting the “challenge” of Couric’s gender in a male-dominated profession.

NPR Host: 'Do Black Folks Really Use Stuff Like iPods'?

Your tax dollars at work, paying public radio hosts to ask if "black folks" are into iPods.

Host of American Public Media's (APM) Marketplace broadcast, Scott Jagow, asked “why would the U.S. or any other country go along” with the European Union's carbon reduction plan if there is “so much skepticism about whether they can actually do it.”

NBC Nightly News anchor, Brian Williams graces the cover of Men's Vogue this month and is profiled by Deputy Editor Ned Martel as being an anchor who, because of "today's debunking culture" (Wink Wink Newsbusters.org), is both "in the know and in on the joke."

Martel panders to Williams as an anchor who is "affable", "witty", and even "an unapologetic throwback to the era of Cronkite".

Martel says that viewers can relate to Williams because he, "has a vast interest in so many of their passions." He further says that Williams "embraces his regular-guy status" and "trumpets his middlebrow tastes".

Williams apparently considers his "instinctive understanding of Middle America" to be a payoff for Nightly News. That understanding must be a tall order for someone who wears a "black-faced Rolex and Supreme Court cufflinks" and splits his time between a "pied-a-terre in a new Upper East Side tower" and a "restored farmhouse in Connecticut".

Reuters reporter William Maclean wrote in his article, "Gaddafi says fear drives world economic system", that Libyan leader Muammar Gaddafi was shunned by the international community for much of his rule because the West "accused him of terrorism."