Graham said the Clinton administration was acting like a "bunch of babies that can't handle criticism." Neil Cavuto asked whether the situation was similar to CBS' pulling of a Reagan movie after pressure from conservatives. Graham said that this situation is different because Reagan "was not allowed to defend himself" and "dying of Alzheimer's Disease" when CBS wanted to air the movie. Bill Clinton, on the other hand, is able to defend himself and say "don't put any lies in it."

After conservative complaints about the Reagan movie, Graham said, the New York Times ran an editorial noting the "Soviet-style chill in the air." But with Democrats now attacking the movie and even threatening to pull the license of ABC, Graham said he doesn't "see anyone attacking the Democrats and the Clinton administration for being censors, for being the people that can't stand criticism." 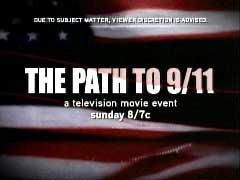 MRC president Brent Bozell appeared on Friday's "Fox and Friends" in the 8am hour beginning at 8am Eastern. The topic discussed was the censorship campaign mounted by Democrats against the ABC miniseries, "The Path to 9/11."

By NB Staff | September 6, 2006 10:46 AM EDT
Open and ready for discussion. Today's starter: Mexico's leftists are refusing to concede their electoral loss. Are they taking a page from Al Gore?

Weekend Captionfest: Rumsfeld and a Dinosaur

"The sky is blue and the Pope is Catholic. I want to see how you spin that phrase."

"A new species of dinosaur is discovered, the Mediasaurus, extinct because it could not adapt to change."

TUCKER CARLSON – MSNBC news anchor -- and often controversial -- conservative political TV pundit and columnist. He will be partnered with professional dancer Elena Grinenko, who makes her series debut this season.

By NB Staff | August 26, 2006 7:44 PM EDT
Because news and discussion don't know weekends. And since the ideology poll thread got full.

UPDATE 16:49. This thread is full, please move all moderation discussion to this new thread.

Jokes, rants, discussion, and whatever else. Fill 'er up, folks!

"Okay, for this next shot, we're going to need you over here."

"Good use of ketchup on that corpse."