Bozell on 'Hannity & Colmes' About Behar Comparing Rumsfeld to Hitler

MRC President Brent Bozell appeared live on Tuesday's Hannity & Colmes on FNC to discuss Joy Behar's quip on Monday's The View, in reference to Time magazine punting on a Person of the Year, that “you have to put like a Hitler type. Like you put Donald Rumsfeld there or something" (Links at bottom of this node to video). Sparring with Alan Colmes, Bozell declared: “I'm sick and tired of the left pontificating and giving me lectures about hate speech.” (Mark Steyn filled in for Sean Hannity with former ABC News reporter Bob Zelnick as the second guest.)

Bozell also recalled how, on last Thursday's edition of the ABC daytime show, Behar seriously suggested Senator Tim Johnson may have been a victim of conservative evil-doing. She proposed: "Is there such a thing as a man-made stroke? In other words, did someone do this to him?" Behar contended the Republican Party is capable of such a nefarious deed: "I know what this, that party is capable of." For video of that December 14 exchange, check the MRC CyberAlert or this NewsBusters item.

Starters: Air marshalls decry charges from imams that they were unduly detained based on racial animus. If people become "afraid of reporting suspicious individuals out of fear of being labeled a racist or bigot, then terrorists will certainly use those fears to their advantage in future aviation attacks." 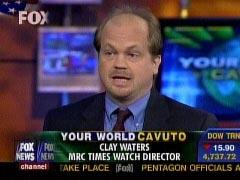 Clay Waters, Editor of the MRC's TimesWatch site and a regular contributor to NewsBusters, was a guest this afternoon on FNC's Your World with Neil Cavuto.

Brent Bozell, the President of the Media Research Center, the parent of NewsBusters, appeared alongside Democratic strategist Laura Schwartz on Monday night's Hannity & Colmes on FNC to discuss the decision by NBC News to call the situation in Iraq a “civil war.” (Earlier NewsBusters items by Mark Finkelstein and by Geoffrey Dickens on how on Today Matt Lauer insisted NBC made the decision “after careful consideration,” as well as an evening show update on NewsBusters from Brent Baker on how NBC admitted the “civil war” term would erode support for the war.) Bozell contended: “Of course it's a mess over there. That does not mean it's a civil war and that's what the question was. And when Matt Lauer and NBC make the editorial determination that it's a civil war that's an editorial and that's a biased judgment on their part.” [The segment is 40 minutes into the show which will re-run at 12 midnight EST, 11pm CST, 9pm PST]

At one point Bozell told Alan Colmes to “hush,” leading Sean Hannity to propose: "Brent, you get the award for the Phrase of the Year: 'Alan, hush.'" Bozell earlier recalled how back in August of 2005 Lauer repeatedly pressed soldiers in Iraq to admit they had low morale, prompting one to fire back: “If I got my news from the newspapers also I'd be pretty depressed as well." (Links to that incident, with video, below the break)

Listening to the story. 60 Minutes Correspondent Scott Pelley and his team not only reported the story of the wild tigers, they took photos, too. (Courtesy: CBS 60 Minutes)