The Washington Post reports that the US is opposing the UN's feeble trotting-out of a new Human Rights Council, but doesn't bother to explain criticisms of the proposal. Almost 2/3 of the article is devoted to quoting the Council's supporters and describing the supposed "improvements," without any discussion of why these changes make things worse.

The Denver Post editorial staff who attacked the NSA international intercept program yesterday probably think of themselves as bold crusaders for domestic civil rights. Unfortunately for them, they comes across as willfully ill-informed. Again.

President Bush launched a campaign-style offensive this week to defend his secret executive order allowing the National Security Agency to eavesdrop, without court warrants, on phone calls and Internet traffic in the United States.

By Joshua Sharf | January 8, 2006 4:50 PM EST
This morning, CNN ran a report (watch) on the plight of Iraqi parents who can't find emergency care for their very sick children, and how

Sanctions, war, and the insurgency have cripple Iraq's once-exemplary medical care....Now there is only one way to make sure her young patients survive: "They need to go outside of Iraq."

For the AP, there's never a lost opportunity to turn Iraq into Vietnam. Now, Saddam's WMDs are the same thing as the Gulf of Tonkin, only worse:

WASHINGTON - A spy-agency analysis released Thursday contends a second attack on U.S. ships in the Gulf of Tonkin never happened, casting further doubt on the leading rationale for escalation of the Vietnam War.

Those New Iraqi Hostages Sure Have Some Interesting Friends...

You know those new hostages in Iraq? The ones whom the Washington Post describes as working for a "peace" group? You know, the one with lots of experience going into war zones?

The BBC has a funny view of international law - make sure the obligations fall on Israel.

Hizbullah launched a failed attempt to kidnap soldiers Monday in an assault on Mount Dov and the northern town of Rajar and a coordinated mortar and rocket barrage on northern Galilee towns and kibbutzim. 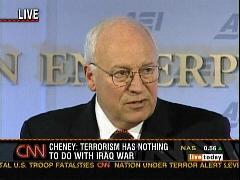 So, Vice President Cheney is addressing the American Enterprise Institute about why the war in Iraq is fundamental to the War on Terror. He explains that a retreat would leave Bin Laden, Zarqawi, and Zarwahiri in control. He explains why the terrorists want Iraq, and what they plan to do with it. CNN's real-time summary at the bottom of the screen?

An Italian film crew claims that the US military indiscriminantly blanketed civilians in Fallujah with the white phosphorus during last year's assault on the city. The Denver Post picks up the Colorado angle on the white phosphorus non-story, and while it impeaches the credibility of the film's star witness, it buries the lead, and leaves most of the background fabrications intact.

Last month, Iranian President Mahmoud Ahmadinejad caused quite a stir by violating every international agreement in existence when calling - at a government-sponsored conference - to "wipe Israel off the face of the map." (The Indispensible MEMRI has the full text of the President-Kidnapper's remarks here.)

Some Rachels Are More Equal Than Others

Tom Gross notes in this week's Spectator (London) that for some reason, if you're Jewish, your death in a terror attack is likely to get a lot less attention ("Dead Jews Aren't News"):

Even though Thaler was a British citizen, born in London, where her grandparents still live, her death has never been mentioned in a British newspaper.

Rachel Corrie, on the other hand, an American radical who died in 2003 while acting as a human shield during an Israeli anti-terror operation in Gaza, has been widely featured in the British press. According to the Guardian website, she has been written about or referred to on 57 separate occasions in the Guardian alone, including three articles the Saturday before last.

By Joshua Sharf | October 10, 2005 4:35 PM EDT
For the Denver Post, First Amendment protections apparently are "loopholes" to be examined. In an article about free speech campaign finance restrictions, the Post focuses on conservative groups' efforts, while biasing the article in favor of such restrictions in general. (This isn't the first site to notice the - oddity - of the state Democrats becoming concerned about the new campaign finance laws just as the Republicans begin to figure them out.

What's a Little Stoning Among Friends?

But when she gets tough, she's formidable, even if "the issues" in the pilot are not exactly earth-shaking. Chief among them is the case of a young woman in Nigeria who, by local custom, is to be buried up to her neck in sand and stoned to death for the crime of having sex and giving birth before marriage.

Some Activists Are More Equal Than Others

Jim Hughes of the Denver Post covers the local activists on both sides of the Robert nomination this morning. Sort of.

Of 18 paragraphs, three discuss the pro-Roberts Judicial Confirmation Network, four equate the two sides, and seven discuss NARAL and other left-wing opponents of a sane judiciary. (Four paragraphs are neutral, not mentioning the activists directly.)

While the Post is silent on the conservatives' desiderata, the coverage of the lefties includes the following:

The "Truth" About TABOR

Colorado will consider a major tax increase this fall, loosening the tight taxing and spending restrictions known as the TAxpayers' Bill Of Rights, or TABOR. Some of the money raised in Referendum C will be earmarked for roads in Referenum D. As part of its attempt to influence - er, inform - the public, the Denver Post today ran the first of a four-part series, "The Truth About TABOR."

The Denver Post has finally broken its silence about the developing Air America story. Only, as with the New York Times and the Swift Boat Veterans, the first mention of it is a dismissal followed by a rebuttal. Dick Kreck addresses the scandal in his radio column in today's Entertainment section.

The AP and the LA Times Keep on Not Barking

One of the more worrying ongoing stories is the arrest of several men for involvement in a conspiracy, hatched in California's Folsom prison to attack Jewish sites and synagogues around the state. What's worrying is that one of the men apparently converted to a radical form of Islam while in prison.

By Joshua Sharf | August 19, 2005 7:29 PM EDT
So you've been waiting for your electric car? The car that's better than a Prius? The car you can just plug in at night and drive all day? The car that doesn't even use oil or even any fossil fuels? Wait on. AP and Denver Post salivating aside, energy independence at a reasonable price is not just around the corner.

Politicians and automakers say a car that can reduce greenhouse gases and free America from its reliance on foreign oil is years or even decades away.