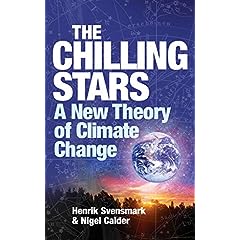 2006 will go down as the year that the media universally tried to sell America on the unproven theory that man-made global warming is destroying the planet, and will cause our imminent doom. Part of this hysteria includes fallacious assertions by all involved that there is a scientific consensus regarding these dire predictions.

Though they are likely to get little attention from an hysterical press, two books by prominent scientists have recently been released that scientifically disprove global warming theories, and supply a little sanity for those who like to proceed with caution before jumping on tenuous bandwagons.

As reported by the Center for Global Food Issues Tuesday (emphasis mine throughout, h/t Drudge):

Two powerful new books say today’s global warming is due not to human activity but primarily to a long, moderate solar-linked cycle. Unstoppable Global Warming Every 1500 Years, by physicist Fred Singer and economist Dennis Avery was released just before Christmas. The Chilling Stars: A New Theory of Climate Change, by Danish physicist Henrik Svensmark and former BBC science writer Nigel Calder (Icon Books), is due out in March. 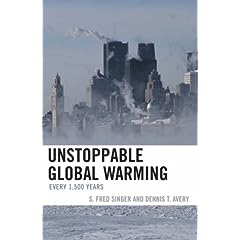 Rather than using theories or unproven temperature models to predict the future, Singer and Avery looked at past historical climate activity:

Unstoppable Global Warming shows the earth’s temperatures following variations in solar intensity through centuries of sunspot records, and finds cycles of sun-linked isotopes in ice and tree rings. The book cites the work of Svensmark, who says cosmic rays vary the earth’s temperatures by creating more or fewer of the low, wet clouds that cool the earth. It notes that global climate models can’t accurately register cloud effects.

Svensmark and Calder studied the issue from a more chemical approach:

The Chilling Stars relates how Svensmark’s team mimicked the chemistry of earth’s atmosphere, by putting realistic mixtures of atmospheric gases into a large reaction chamber, with ultraviolet light as a stand-in for the sun. When they turned on the UV, microscopic droplets—cloud seeds—started floating through the chamber.

“We were amazed by the speed and efficiency with which the electrons [generated by cosmic rays] do their work of creating the building blocks for the cloud condensation nuclei,” says Svensmark.

The Chilling Stars documents how cosmic rays amplify small changes in the sun’s irradiance fourfold, creating 1-2 degree C cycles in earth’s temperatures: Cosmic rays continually slam into the earth’s atmosphere from outer space, creating ion clusters that become seeds for small droplets of water and sulfuric acid. The droplets then form the low, wet clouds that reflect solar energy back into space. When the sun is more active, it shields the earth from some of the rays, clouds wane, and the planet warms.

Unstoppable Global Warming documents the reality of a moderate, natural, 1500-year climate cycle on the earth. The Chilling Stars explains the why and how.

Hmmm. Imagine that: actually looking at climate trends over a 1500-year period to reach conclusions rather than extrapolating theories based upon weather changes in the last century.

By contrast, the global warmingists are predicting the outcome of a football game after only witnessing four minutes.

Which do you think represents better scientific analysis?

Regardless of the answer, don't expect the morning shows to be paying much attention to these books or these authors, or to ask global warmingism prophet Dr. Al Gore to comment about their findings.