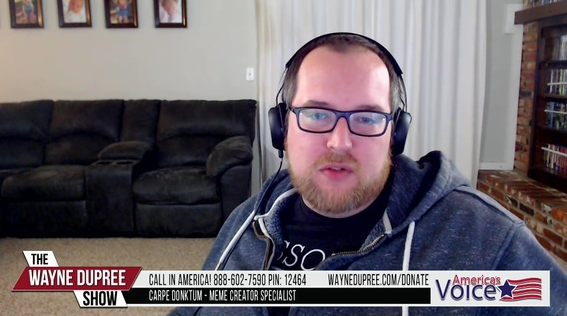 Update: Later on the afternoon after this article was published, CarpeDonktum tweeted that he "received word that @HuffPost has reconsidered their position and no longer intends to print my real name in their publication." He has stated his thankfulness to "EVERYONE who has had my back and stood up against these unaccountable media publications and their unethical practices."

Only a few days after BuzzFeed thought better of endangering his life by revealing his private information, Huffington Post appears ready to do it themselves.

The pro-Trump YouTuber, who goes by the online name CarpeDonktum, revealed that Huffington Post is considering releasing his personal information. This has dire implications as many public internet personalities on both sides receive death threats and harassment.

According to Fox News a young girl who made multiple videos parodying Rep. Alexandria Ocasio-Cortez (D-NY) “is no longer going to make videos due to death threats and harassment she and her family have received.”

As was the similar case of Fox News host Tucker Carlson, reveals of personal information can lead to activists raiding one’s house in retaliation for mere words.

Perhaps someone like Carlson can afford higher security, but for smaller creators, the intimidation by news sources may work as an attempt to silence them.

Clearly, being made a public figure in this age of information has dire consequences.

CarpeDonktum tweeted on July 17 that he “just received word that @HuffPost is preparing an article on me and they intend to print my real name.”

Human Events managing editor Ian Miles Cheong tweeted in response that “HuffPo is trying to endanger Carpe Donktum's life and upend the lives of his wife and kids by unveiling his pseudonymity. Is this journalism? No, I don't think so. He is not accused of any crime, nor has he harassed anyone to merit this level of personal scrutiny.”

Carpe Donktum’s memes have been retweeted by the president multiple times and even received a shoutout during a July 17 rally.

Even in the face of impending harassment and threats that are the likely result of having his name revealed without consent, Carpe Donktum appears to be in good spirits.

He made a video which was purportedly an announcement of his retirement from political commentary. The video turned out to be yet another jab at Democrats, invoking the classic Rick Astley/RickRoll bait and switch prank where one ostensibly shares a serious video which turns out to be Rick Astley’s classic “Never Gonna Give You Up.” As is his MO, Donktum skillfully made it feature Trump and Obama.