If you ever doubted that the media see the news through a partisan prism, consider this: in less than two days, ABC, CBS and NBC devoted nearly 7 times as much coverage to Jeff Sessions meeting with the Russian Ambassador in his role as a U.S. Senator than they did when then-Attorney General Eric Holder was held in contempt of Congress in June 2012.

On March 2, Democrats accused Sessions of misleading Congress by not disclosing that he met with the Russian ambassador to the United States twice while he was serving as Senator. Despite admitting that the statements Sessions made to Congress “would not be considered false under the law” (Jan Crawford, CBS Evening News, March 2), ABC, CBS and NBC devoted more than 1 hour and 12 minutes to this topic, just on the morning and evening shows of March 2 and the morning shows of March 3. 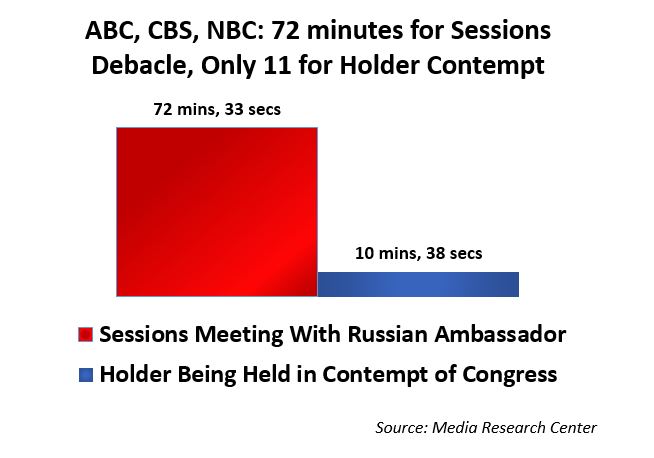 CBS covered the Session controversy the most, with an overwhelming 28 minutes and 42 seconds. NBC followed with 25 minutes and 12 seconds, while ABC had 18 minutes and 39 seconds of coverage.

On Good Morning America on March 3, Chief White House Correspondent Jonathan Karl quipped, “Both the Russians and the White House has used the phrase “witch hunt” to describe this. And as for the ambassador, George, at some point you get to wondering who didn't meet with the Russian ambassador on this campaign.”

On the NBC Nightly News March 2, Peter Alexander strongly implied that Sessions had committed perjury, “While the White House is defending Sessions, his testimony under oath remains under scrutiny with critics pointing to this 1999 interview where then Senator Sessions called perjury claims against President Bill Clinton serious allegations.”

Back on June 28, 2012, then-Attorney General Eric Holder became the first Cabinet member to be held in contempt of Congress for withholding documents from the House investigation into the Obama administration's Fast and Furious scandal. 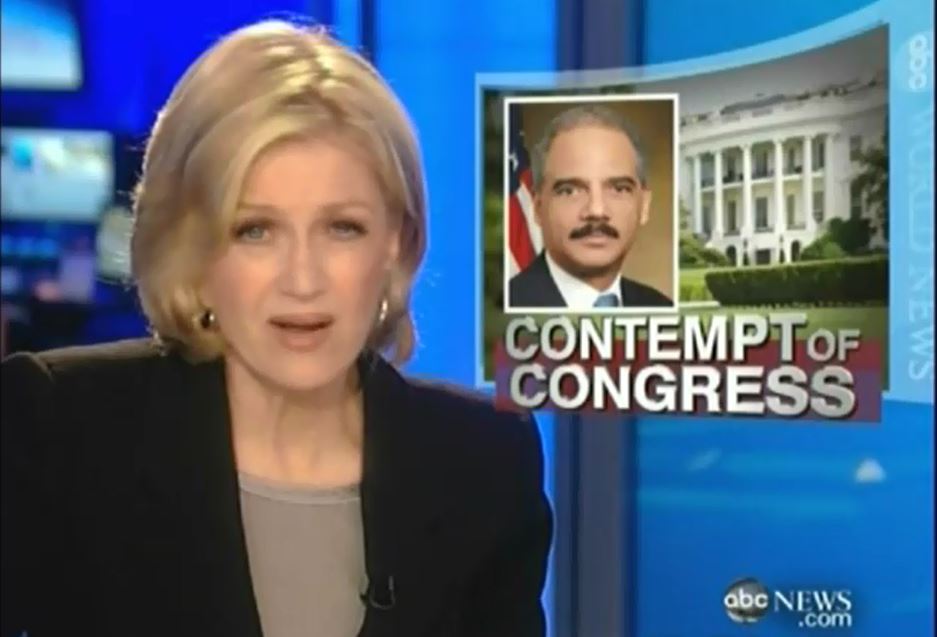 But that unprecedented move failed to rouse the interest of the broadcast networks. Anticipating the vote later that day, the three broadcast morning shows on June 28 offered a combined 91 seconds of coverage. That night, only NBC offered a full report (2 minutes, 8 seconds), while CBS and ABC limited themselves to brief anchor-read items (30 and 35 seconds, respectively).

The next morning, only NBC's Today show offered a full report (2 minutes, 50 seconds) along with a pair of short items and a brief mention in an interview with then-Obama aide David Axelrod, while ABC and CBS again offered only short items.

Add it all up, and the unprecedented contempt charge against Obama's Attorney General earned only 10 minutes, 38 seconds of network airtime, or only slightly more than one-seventh of that spent in the last day-and-a-half over Sessions' meeting with the Ambassador.

According to Fox News, the Obama Administration arranged at least one of the two meetings between then-Senator Sessions and the Russian Ambassador: at a “Global Partners in Diplomacy” conference hosted by the State Department. The “meeting” that took place at the conference? “Apparently, after Sessions finished speaking, a small group of ambassadors—including the Russian ambassador—approached the senator as he left the stage and thanked him for his remarks.”

As the MRC has previously documented, the network coverage of Trump has been both plentiful and overwhelmingly (88 percent) negative.

Special thanks to MRC news analysts Scott Whitlock, Kyle Drennen and Kristine Marsh for contributing to this report.