In the month of January, Comedy Central's Daily Show devoted over ten times more coverage to mocking Republicans or conservatives than to mocking Democrats or liberals.

The Daily Show aired 11 full segments that targeted conservatives or Republicans. Only one segment mocked President Obama – from the left – over his speech on the NSA spying program. Four segments mocked both conservatives/Republicans and Democrats/liberals. 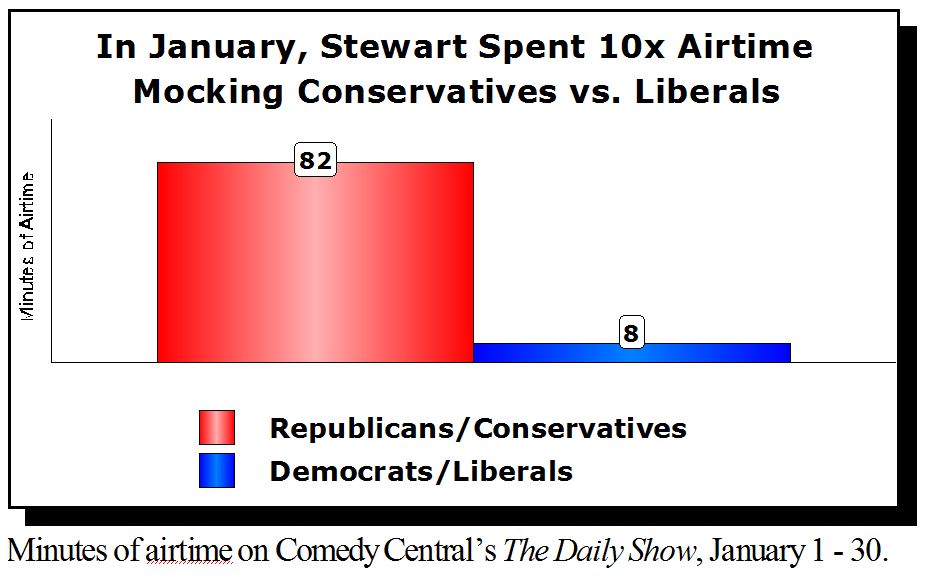 Stewart's most innocent target was the Little Sisters of the Poor. On January 6, he chided them for the futility of continuing to oppose ObamaCare's contraception mandate:

"Wait, you don't want to sign the form, because that piece of paper enables your employees to then get contraception? Because you do realize every week you already give them paper issued by the government that allows them to get contraception, right? It's called money. And to the nuns, you're adorable, you're doing nice work, but if you want to live in our muggle world, you'll soon realize we cannot control our urges. And I guarantee your workers are already using this money to buy all kinds of objectionable items, booze, cigarettes, multi-colored clothing. And just because someone works for you doesn't mean you get to control their personal lives."

Stewart also took on global warming deniers on that same show, comparing them to those having a massive head would and denying it.

Three segments focused on Chris Christie's bridge controversy, and one of those also highlighted the scandal of former Virginia Governor Bob McDonnell. And on January 29, after making fun of both Obama's State of the Union address and the Republican response, Stewart spent almost eight minutes attacking GOP obstruction in Congress and Rep. Michael Grimm (R-N.Y.) for threatening a reporter.