On Monday, NBC’s Today devoted a nearly three-minute report to stoking fears that Donald Trump’s supporters could cause violence if the Republican nominee is defeated in November, while only offering a scant 39 seconds of air time to a GOP campaign office in North Carolina being firebombed over the weekend.

Teasing the story on Trump voters, co-host Savannah Guthrie warned: “Just ahead, claims of a rigged system, calls for revolution. The very real worries about what might happen after election day.” In the segment that followed minutes later, correspondent Hallie Jackson proclaimed: “It’s not all of Donald Trump's supporters, but some, who are now talking more about rising up or a revolt, seizing on Trump's rhetoric about a rigged system.”

Jackson fretted: “How many steps is it from ‘rigged’....to a revolution? With Donald Trump intensifying his argument the system isn't fair, growing concern from his critics about why that's so dangerous.” The reporter had the audacity to feature a sound bite from left-wing HBO host Bill Maher to lecture viewers on civility: “If you have that mindset, and then he loses, what happens?”

In July, Maher referred to Republicans as “retarded Nazis” who plan to force immigrants into “boxcars.”

It was precisely that kind of rhetoric that was employed by the criminals who firebombed the Republican Party office in North Carolina. Co-host Matt Lauer noted the incident in a 22-second news brief at the top of the 7:30 a.m. ET half hour:

The FBI is assisting the investigation into a weekend firebombing of a Republican Party office in Orange County, North Carolina. Someone threw a bottle of flammable liquid through a window, that sparked a fire. Graffiti that read, “Nazi Republicans, leave town or else,” was also found on a nearby building. No suspects have been identified.

In addition to those mere seconds of coverage, correspondent Peter Alexander offered a 17-second mention of the attack during an earlier report: “Republicans divided and now under attack. A GOP office in North Carolina firebombed, a nearby building vandalized. So far, no arrests, but Trump blames ‘Animals representing Hillary Clinton and Democrats.’ Clinton condemning the attack as ‘horrific and unacceptable.’”

Notice how that reporting focused on Trump’s comments more than the actual crime. At the top of the show, Lauer declared: “Out on a limb? Donald Trump ratchets up claims the election is rigged....And after the Republican headquarters in North Carolina is firebombed, Trump points the finger at, quote, ‘Animals representing Hillary Clinton.’ Are his accusations and attacks having any impact?”

In sharp contrast to NBC, both ABC’s Good Morning America and CBS This Morning provided full reports on the firebombing.

Here is a full transcript of Jackson’s October 17 report:

SAVANNAH GUTHRIE: Just ahead, claims of a rigged system, calls for revolution. The very real worries about what might happen after election day.

SAVANNAH GUTHRIE: And that talk of a fix on the election has some of Trump’s supporters now talking revolution if he doesn't win. NBC’s Hallie Jackson is in Washington with that part of the story. Hallie, good morning. 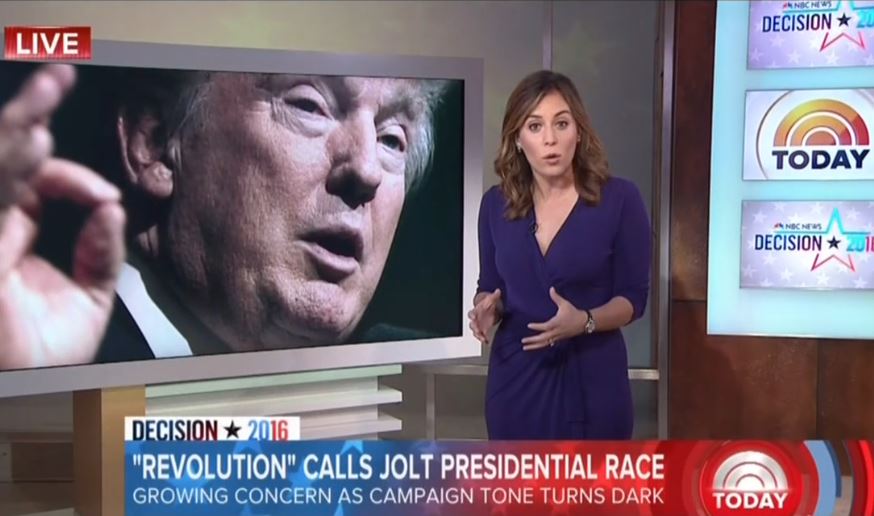 HALLIE JACKSON: Hi there, Savannah, good morning to you. It’s not all of Donald Trump's supporters, but some, who are now talking more about rising up or a revolt, seizing on Trump's rhetoric about a rigged system.

How many steps is it from “rigged”...

TRUMP: The election is being rigged.

TRUMP: The whole system is rigged.

JACKSON: ...to a revolution?

TRUMP: We can't let them get away with this, folks, we can't. Total lies, you've been seeing total lies.

JACKSON: With Donald Trump intensifying his argument the system isn't fair, growing concern from his critics about why that's so dangerous.

BILL MAHER [CNN/FAREED ZAKARIA GPS]: If you have that mindset, and then he loses, what happens?

UNIDENTIFIED WOMAN [TRUMP SUPPORTER]: It will be 100% chaos, no more America, rigged.

JACKSON: At some Trump rallies, some supporters talk of rising up.

UNIDENTIFIED WOMAN B [TRUMP SUPPORTER]: I believe if she wins, we will end up in a war.

UNIDENTIFIED WOMAN C: We're going to rise up because we're tired of taking it, we’re tired of being deplorable.

JACKSON: In Wisconsin, Sheriff David Clarke, a Trump backer, now facing new backlash for tweeting it's “Pitchforks and torches time.” Clarke later mocking the media for what he calls its “freak out.” Overnight arguing he wasn’t inciting violence. Instead, saying many Americans think their government no longer belongs to the people, adding, “I encourage them to join me and pushing back against the corruption that has infected our institutions of government.” And in the Boston Globe, another Trump supporter quoted as saying, “There's going to be a lot of bloodshed” if Clinton wins.

GIULIANI: Look, you’ve got millions of people, each side has a couple of kooks.

JACKSON: The Trump campaign referring us to its comment in the Globe, quote, "We reject violence in any form." Pointing instead to the millions of Americans who will make their voices heard at the ballot box.

MIKE PENCE: We’re going to do it.

UNIDENTIFIED WOMAN D [TRUMP SUPPORTER]: I will tell you, just for me, and I don’t want this to happen, but I will tell you for me personally if Hillary Clinton gets in, I myself, I’m ready for a revolution because we can't have her in.

JACKSON: Others resigned to what could happen if their candidate comes up short.

UNIDENTIFIED MAN [TRUMP SUPPORTER]: We’ll have no choice but to accept the outcome. You know, that's all we can do.

JACKSON: As for what Trump could do if he were to lose in November, the Financial Times this morning is now reporting that Trump's son-in-law, Jared Kushner, has, in their words, “informally met with a top media executive to discuss the possibility of setting up a Trump TV network after the election.” Matt, Savannah?