Stein Rips Into CNN, NYT, 'Looking for a Scandal' From Trump 'Every Day' 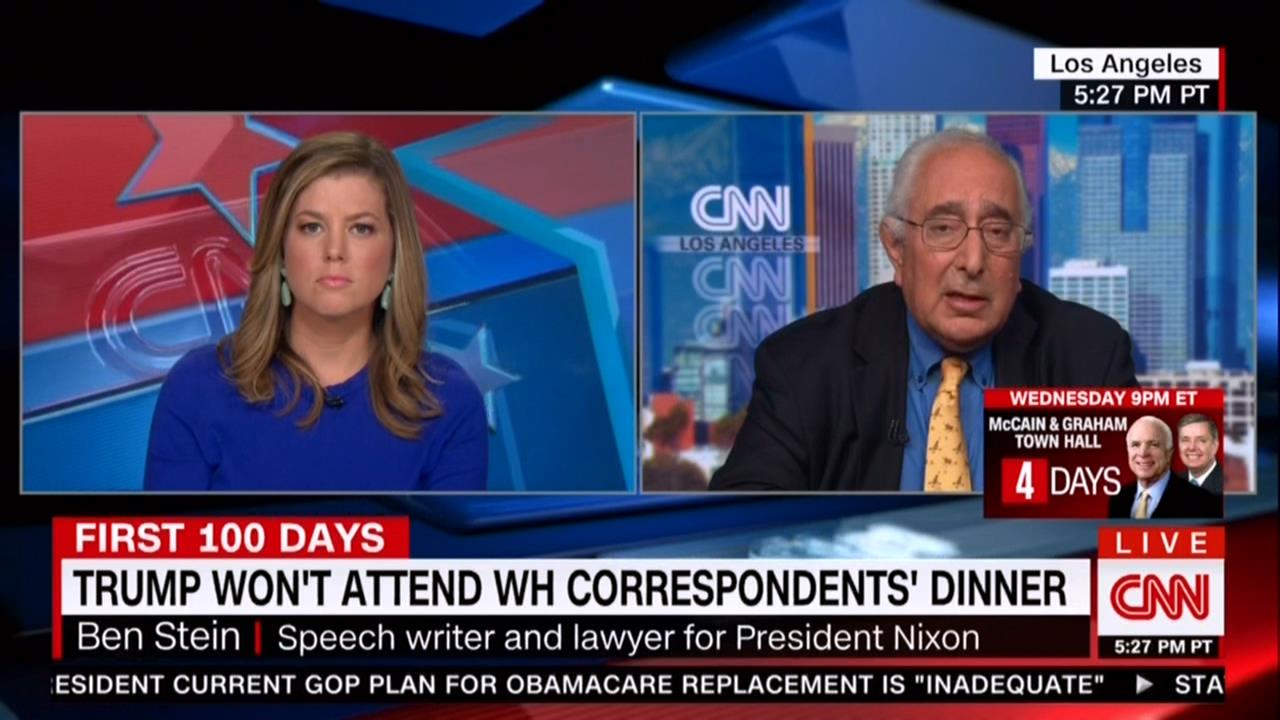 Economist and former speechwriter for Richard Nixon, Ben Stein, appeared on CNN Newsroom last Saturday, where he slammed the media for making Trump a “punching bag” and “looking for a scandal” from the president on a daily basis. Stein told CNN’s Brianna Keilar, “I don't blame him for being furious at [the media].” Stein noted, “I think he's got a lot of company."

Host Brianna Keilar began by asking Stein what his reaction was to Trump skipping the annual White House Correspondents’ Dinner. Stein responded that he didn’t “blame” Trump for “not wanting to go and be a punching bag” for the media, yet again:

Keilar then asked Stein if he agreed with Trump that the media was the “enemy of the people.” Stein conceded that not all of the media was that, before calling out The New York Times and CNN in particular for “slamming” Trump on a daily basis and always “looking for a scandal.”

Stein told Keilar that “all over the country” an “awful lot of people” see the media as an “unelected aristocracy” who are “dumping all over the mainstream of America,” so Trump was in good company:

STEIN: And with all due respect, I don't blame him for being furious at them. And I think he's got a lot of company. I'm out there giving speeches all around the country all the time, people, an awful lot of people are not great fans of the media and they see the media as an unelected aristocracy and an 'effete corps of impudent snobs' as Vice President Agnew called them a long time ago, who are dumping all over the mainstream of America. And I think Mr. Trump has a lot of company.

Keilar pushed back, asking if some of the drama reported by the media was “self-inflicted.” Stein conceded that Trump was not the “smoothest operator” but said, regardless, the press was overwhelmingly negative towards him in their reports.

STEIN: Mr. Trump is not the smoothest operator. I mean, he's not Bob Hope. And he's thin skinned and he fires right back. I agree, no doubt, there's no doubt some of it is self-inflicted, but I think this general idea that the press can just hack and hack and hack away at the president, that he's expected to sit there and take it, is not a sound idea.

After Keilar pushed back that the media did cover some positive stories on Trump, Stein pointed that these “one or two” stories were outweighed by “hundreds” of negative ones, such as the recent accusation by the media that Trump was anti-Semitic.

STEIN: That's one or two of hundreds of stories, most of which are extremely negative. And God bless you for doing the positive stuff, but look at the way they slammed him for not covering immediately the desecration of the Jewish cemetery outside St. Louis. I mean, this is a guy, and look at the way the media is endlessly playing him off as an anti-Semite. This is a guy, who has a Jewish son-in-law. His own daughter went and converted to Judaism. Who’s never been quoted saying a single anti-Semitic word, and they’re constantly slamming him as being a racist or a white supremacist or something without any evidence of it at all. I think with the greatest respect, and I appreciate you pointing things out where I was mistaken, but with the greatest respect, this is a guy they are just smearing, smearing, smearing all the time. I don't blame him for wanting to fire back at them. If he were as smooth as Ronald Reagan, he would handle it more smoothly. But no one, again, will ever be as smooth as Ronald Reagan.

“They are trying to undo him basically before he even gets started,” Stein slammed. “I think it's just extremely unfortunate.”

"The country has real problems and for them to be focusing on trying to bring down this guy before he’s even gotten started is a serious mistake,” he stated.