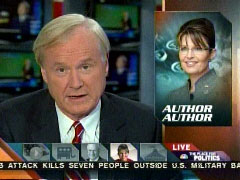 Chris Matthews, on Wednesday's "Hardball," mocked a plan by the RNC to cast Democrats as the Democrat Socialist Party, as "schoolyard," and sarcastically sneered "Boy they're going places with that one." However it was Matthews who spent the entirety of his show engaging in "schoolyard," insults himself as he compared Dick Cheney to a "troll," claimed Pat Buchanan once represented the "Neanderthal" wing of the GOP and thought the idea of Sarah Palin penning a book was laughable.

CHRIS MATTHEWS: Plus Sarah Palin – now don't laugh – is writing a book. Not just reading a book, writing a book. Actually in the word of the publisher she's "collaborating" on a book. I love the way that sounds. Does that mean she answers questions of the writer and then the writer writes the book? I guess the reason to have someone to write a book for you and claim it's your book is to get to do a nationwide book tour and act the part of a, of an author yourself. Well she's not the first person to pull that number. Sarah Palin - author! In tonight's Politics Fix...What is Sarah Palin up to?....She's got this book deal, she obviously is not gonna write it. They've already announced somebody is, she's gonna collaborate on it. What an embarrassment! It's one of these "I told you," books that jocks do. You know she's already declared, I mean, why they do it like this? "She can't write, we got a collaborator for her."

During the show Matthews, who apparently subscribes to a "Do as I say, not as I do," philosophy made fun of a reported plan by the RNC to start using the word "socialist" in referring to Democrats in the following teaser:

MATTHEWS: Up next we have heard often the Republicans, on this show, deride their opponents by calling them the "Democrat Party," you know without the adjective? The Democrat Party. Well apparently that's not enough any more. Now the RNC wants to rebrand the Democrats, unilaterally, the "Democrat Socialist Party." Hmm. Is this the best they've got? Sounds like schoolyard to me. Nah, nah, nah, nah, naaah. Boy they're going places with that one. The latest on the GOP agony. Next! You're watching "Hardball."

The "Hardball," host then proceeded to pepper Republican targets with his own "schoolyard," insults as seen in the following exchanges from the May 13th edition of "Hardball":

MATTHEWS: Go for it.

DEUTSCH: First of all he's an American, he's allowed to speak his mind.

DEUTSCH: If you're Dick Cheney what do you have to lose? We all know, unfortunately, there will be a terrorist attack. It might be next year, it might be 10 years.

MATTHEWS: So he's betting on red?

DEUTSCH: And basically at that point we're gonna be looking at the world differently, just like we did on September 12th.

DEUTSCH: You know we talked about this on Scarborough the other morning. You know we're all ideologues right now. The day after 9/11 you ask anybody, torture yes? Torture no? I'm all in on torture.

MATTHEWS: Okay so that's when the troll comes out from under the bridge-

DEUTSCH: Exactly! And I think-

MATTHEWS: In the meantime he bites the foot of every Democrat that passes over the bridge, but he comes out from under the bridge when that time comes and says?

DEUTSCH: "I told ya! Here we are. And by the way it will be the downfall of the Democratic Party because they will be the weak party, we are a defense party." Obviously nobody else can do it and he's got nothing to lose. He's the ogre right now any way.

MATTHEWS: There's one high profile politician who's speaking out against Dick Cheney. Former Minnesota Governor Jesse Ventura says he wants to, I think this is somewhat tongue-in-cheek but we'll see. He wants to waterboard Cheney. Interesting idea. That's next in the Sideshow. Would he give? Would he break? Would he give away Bush? Or would he give away himself? Who knows? You're watching "Hardball" on MSNBC.

MATTHEWS TO GUEST PAT BUCHANAN: You're getting too soft...Pat Buchanan supports Charlie Crist? I mean, I think he used to stand for Neanderthals. Now he's for the most debonair of all Republicans.