A departure tonight from my usual Saturday offerings of news media/politics-related humor clips. Instead, something a bit more light-hearted about an until now un-chronicled historic breakthrough.

Tom Hanks has produced a bunch of HBO mini-series, including Band of Brothers, The Pacific and John Adams, and Thursday night on CBS’s Late Show he made some fun of himself as he presented a promotional clip for a new “mini-series event” in which he will star. It will tell the story of “Bert Loomis,” inventor of a certain revolutionary breakfast food product.

Don Imus, for one, is not surprised by Tom Hanks' recent comments calling WWII and the War on Terrorism racist crusades undertaken by the United States.

First brought to his attention by "Imus in the Morning" producer Bernard McGuirk on the show, the remarks were news to the host - just not shocking news.

"Oh darn, what a surprise. We have another panty-wearing liberal dickweed from Hollywood - of course!" Imus told McGuirk.

McGuirk dubbed Hanks "Tehran Tom" for remarks the actor made March 5 on-set of MSNBC to promote "The Pacific," the HBO mini-series he helped produce.

Over the weekend, Time Magazine published a long, glowing profile of Tom Hanks to help promote his upcoming HBO miniseries “The Pacific.” And as with all things entertainment media, the subject is never challenged or even made to shift uncomfortably in his seat. The push to ascend Hanks to “national treasure” status is clearly on.

Hanks does seem to be a genuinely nice man and the work he’s done to bring American history to life on film is impressive, especially during a time when the singling out of America’s exceptionalism is more and more frowned upon in artistic and academic circles. ”From the Earth to the Moon,” “Band of Brothers,” and “John Adams” are not only artistic achievements, but in this MTV-addled culture, might be the best hope of teaching America’s youth about the unique history and greatness of this nation. And I suspect ”The Pacific,” the 10-part miniseries premiering this Sunday on HBO (which Big Hollywood’s Michael Broderick will cover extensively) will be a worthy addition to what came before.

But when it comes to leftist Hollywood, whenever Tinseltown and America meet, you have to brace yourself for it — and by “it” I mean the leftist sucker punch. Throughout, Hanks sounds perfectly reasonable, intelligent and even patriotic for a couple of thousand words. But of course that’s just the lure to get us on his side before we’re walloped with this left cross: [emphasis mine] 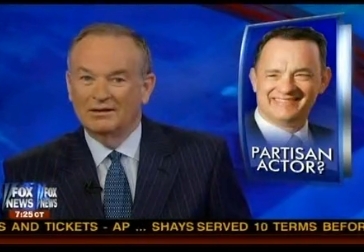 Bill O'Reilly fired back at Tom Hanks on Friday after the Oscar-winning star mocked Fox News on MSNBC earlier in the day.

"[H]e goes to a very low rated, left-wing network, where he poses as a producer playing off a video that showed a fight in an Italian TV newsroom," said O'Reilly.

"Now, that doesn't diminish his talent, which is major, but it does make him kind of a mindless partisan" (video embedded below the fold with transcript):

Of all the networks Tom Hanks might have mocked during a little stunt on Morning Joe today, he just happened to settle on Fox. For good measure, he worked Tea Partiers and Ann Coulter into his mix. [H/t reader Ray R.]

Morning Joe had just aired a clip of an actual fistfight that broke out live-on-camera between two TV producers at an Italian TV station. Cut to Hanks in the Morning Joe control room, pretending to produce . . . 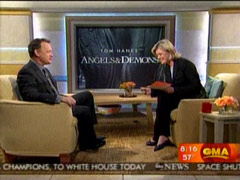 "Angels & Demons" star Tom Hanks received zero critical questions or challenges when he appeared on Monday's "Good Morning America" to promote a movie that features the Catholic Church ordering a brutal massacre in order to silence a secret society. Instead, Sawyer referred to the film, a prequel to "The Da Vinci Code," as a "scary, spiritual scavenger hunt." After playing a clip of Hanks' character in the film asserting that he has no religious beliefs, she moved on to talking about how the movie star still gets nervous when he acts.

It's not as though Hanks didn't open himself up to questions about the film's validity. He admitted to Sawyer that in a few years, this movie, like every one he's made, will be subject to wondering "if moments are proper or authentic. Or if it actually, really, has some purpose in its reflection of, like, the human zeitgeist and that's where you find out whether or not you were telling the truth or not." Wouldn't this have been a good point to jump in and debate some of the assertions made in the book and movie? Sadly, Sawyer remained silent.

Contrast the gentle way that the ABC host treated Hanks with the grilling of Mel Gibson in a 2003 "Primetime" special on "The Passion of the Christ." Regarding accuracy and his film about Jesus Christ, Sawyer pressed for specifics: "What about the historians who say that the Gospels were written long after Jesus died, and are not merely fact, but political points of views and metaphors? Historians, you know, have argued that in fact it was not written at the time [of Christ]. These [gospel writers] were not eyewitnesses."

In the 30-second segment, soldiers recount the welcome they received when they first returned home from either Iraq or Afghanistan.

CBS Claims ‘Battle Between Tom Hanks And The Vatican’ Over Movie

On Thursday’s CBS "Early Show," co-host Maggie Rodriguez described the Catholic Church’s refusal to allow filming on Church property of a movie prequel to "The DaVinci Code," starring Tom Hanks, this way: "...the battle between Tom Hanks and the Vatican. You know he's in Rome filming the prequel to 'The Da Vinci Code,' 'Angels and Demons,' and the Church there is up in arms, they're barring them from filming in churches. They believe the film, like the book, is sacrilegious."

On Wednesday, ABC’s "Good Morning America" featured a story on the controversy in which correspondent Nick Watt declared: "When the might of Rome clashes with a literary behemoth, expect some colorful language. 'An offense against God,' is what a diocese of Rome spokesman just called this book." Watt then later proclaimed: "The Dan Brown express will not be stopped," to which GMA co-host Diane Sawyer replied: "Yes, Nick, I mean that's the irony, isn't it? The more the Church complains, probably the better it is for the business."

Meanwhile, on Thursday’s "Early Show," correspondent Allen Pizzey explained: "Fans of the book, 'Angels and Demons,' keep streaming into the churches in Rome where the plot unfolds. But the film crew turning it into a movie has been banned from them and any other Church property. The plot is not overly anti-Church, but some of the most graphic scenes are not something with which the Church wants to be associated."

CNN, following in the footsteps of ABCNews.com’s overblown take on the subject, couldn’t help but to insert snotty language into its report on the Catholic Diocese of Rome’s denial to the filming of the movie adaptation of Dan Brown’s "Angels and Demons." CNN international correspondent Jennifer Eccleston, closing her report on Thursday’s "American Morning," labeled the Church’s refusal, based on "The Da Vinci Code" book and movie’s bashing of the Catholic faith, "a big problem in Rome, where some sins are just too grave to be forgiven -- even if they're for art's sake."

"Sins" that are "just too grave to be forgiven" calls to mind Matthew 12:32, where Jesus Christ refers to blasphemy against the Holy Ghost as a sin that won’t be forgiven "neither in this world, nor in the world to come." It isn’t certain that Eccleston had this scriptural quotation in mind, but she certainly gave the impression that the Church is being "un-Christian" for not letting Ron Howard and Tom Hanks film there.