All three networks couldn’t stop gushing over pop star Taylor Swift’s liberal awakening on full display at last night’s MTV Video Music Awards. While accepting an award, the singer called on the White House to respond to a Change.org petition to pass the “equality act” a federal level law banning “discrimination” against transgender and gay people. ABC, NBC and CBS gave Swift the royalty treatment, praising her “powerful” and “intelligent” speech and “transformation” embracing the left.

MSNBC truly doesn’t have much use for dissenting views – even from the Republican contributors who appear on the network to offer a supposedly conservative or (lowercase-L) libertarian perspective. On Saturday’s Weekends with Alex Witt, GOP strategist Susan Del Percio marched in lockstep with all of the liberals on MSNBC by lashing out at Arizona’s proposed religious freedom bill.

Del Percio appeared as part of the episode’s “Big 3" panel. Liberal contributor Goldie Taylor was the first to comment on the Arizona bill, and she was predictably venomous toward it, believing it was just an excuse for business owners to discriminate against homosexuals. Fill-in host T.J. Holmes then turned to Del Percio and gave her a chance to play up the religious freedom aspect of the bill:

Here’s something I bet you never imagined someone saying on MSNBC: “This [administration] is the most hostile to the media that has been in United States history.”

Yet there was syndicated columnist and former CNN correspondent Bob Franken saying so on Saturday’s MSNBC Live (video follows with transcript and commentary):

Apparently, Newt Gingrich wanting to employ students from poor neighborhoods and teach them job skills means that he believes they possess "no work habits." CNN obliged to put words in the candidate's mouth during Friday's 1 p.m. news hour as its headlines slammed Gingrich's "controversial" statements.

Anchor T.J. Holmes admitted that the candidate "tends to say some pretty edgy things every now and again," and CNN headlines blared that Gingrich's "controversial" talk "could become a campaign liability," and that his statement "targets children in 'poor neighborhoods'."

On CNN, Kermit the Frog Mocks Perry, Says 'Newt' Is From the 'Swamp'

CNN host Wolf Blitzer and his esteemed guest Kermit the Frog both mocked Rick Perry on Thursday afternoon's The Situation Room.  Kermit also said earlier on CNN that the political pundit he would like to spar with on Blitzer's show would be "Newt" from the "swamp."

CNN's T.J. Holmes, reporting Tuesday on the eviction of "Occupy Los Angeles" and the subsequent arrests of 200 protesters, simply numbered the arrests as totaling in the "dozens." Apparently for CNN, over 16 dozen arrests still merits the count of "dozens" rather than "scores" or even "hundreds" or simply "200."

CNN held sympathy for "Occupy L.A." in more ways than one. During the 12 p.m. hour, Holmes asked a city police commander if some of his colleagues sympathized with the protest or even had wanted to join the "occupiers" before they had to evict them.

The network simply listed Rosen as a "CNN political contributor," failing to disclose her past as a Democratic strategist. Not surprisingly, Rosen downplayed the shock of a Republican victory in former Congressman Anthony Weiner's district, which had been Democratic since the 1920s, remarking that "there's too much made of it."

CNN's Holmes: More Divorces Are 'a Sign That the Economy Is Getting Better'

Economic growth in the first quarter was an abysmal 1.8 percent.  Last week, initial jobless claims increased by 25,000 from the previous week, up to 429,000.  The Federal government borrows $188 million an hour, or over $52,000 a second, just to keep up with President Obama's spending demands.  Despite almost a trillion dollars for Obama's and the Democratic Congress's stimulus, unemployment remains at 8.8 percent.

Amid all these storm clouds, the Obamamaniacs at CNN have found a silver lining.  Anchor T.J. Holmes on CNN Newsroom reported today:

Here is a sign that the economy is getting better, an unexpected sign you didn't think about. Divorce rates in the U.S. are on the rise. It's explained here. In 2000 before the recession, of course, way back before the recession, the divorce rate was 4.0. When hard times started in 2007 the breakup rate dropped to 3.6 percent here. But then last year it fell a bit more, a bit more to 3.5. That was the divorce rate then. So, fewer and fewer people are getting divorced.

In a bizarre wrap-up to the 2 p.m. EDT hour of CNN "Newsroom" Thursday, anchor T.J. Holmes confessed his "eco-sins" to the audience. Commemorating the eve of "Earth Day," Holmes admitted to his "green" faults which included driving an SUV by himself to work daily, blasting the heat in his house during winter, and using "less efficient" incandescent bulbs for lighting.

"These are my eco-sins. I'm confessing them to you because tomorrow is Earth Day," Holmes announced to the audience.

"It often goes ignored by many of us, including me. Not going to ignore it this year. Why? Well, maybe it was an awakening. Maybe I was scolded recently by an environmentalist. Maybe I'm tired of wasting my own money," he rambled, before wishing the audience a happy Earth Day. 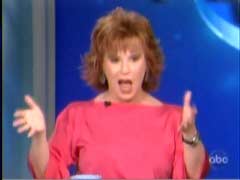 As the Texas State Board of Education worked to complete its once-every-ten-year revision of the curriculum for the state’s schools in May, much of the mainstream media promoted complaints and distortions from the left – many originating with the left-leaning Texas Freedom Network – about the nature of the changes in the guidelines and how they would effect textbooks that might end up in other states. One of the more incendiary distortions was that the conservative-leaning Texas Board of Education was trying to downplay or ignore the existence of slavery in America’s history as some on the left claimed that the term "slave trade" was being renamed "Atlantic triangular trade" thus removing the word "slave" or "slavery" from the curriculum. Joy Behar of ABC’s The View and of HLN’s Joy Behar Show went the furthest in slamming the board of education as she charged on the May 17 The View that "It's called revisionism. People do it about the Holocaust, and now Texas wants to do it about our country." She soon mockingly declared: "You know what, next they'll be burning books. Next step, burn books."

NBC’s Rehema Ellis mentioned the issue on the NBC Nightly News on two consecutive nights, on the May 22 show charging, "And the expression 'slave trade' would be changed to the 'Atlantic triangular trade.' Some critics see that as a move to deny slavery," while ABC’s Dan Harris on the May 21 World News asserted, "Here are some of the things the conservatives tried and failed to do: Have the President called by his full name, Barack Hussein Obama, which some called an attempt to raise questions about his faith, and even rename the 'slave trade' as the 'Atlantic triangular trade.'"

But CNN’s T.J. Holmes deserves credit because he actually took the time to inform viewers of the wording in question, first as he, on the May 22 CNN Saturday Morning, hosted a debate between NAACP President Benjamin Jealous and Jonathan Saenz of the Liberty Institute, with the CNN anchor revealing that the new wording still used the word "slavery" as he posed a question to the NAACP president. Holmes: "I want to make sure, because I read this thing as well and I did see 'Atlantic triangular trade' in there, but then in the next, almost couple of words I saw the word 'slavery' ... Now, what is the issue with that that you call it a 'triangular trade' and then you're still talking about slavery and you used the word ' slavery'? What's the issue?" 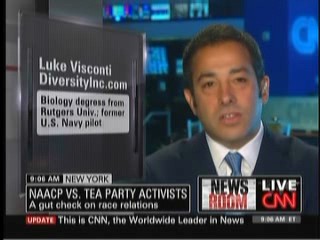 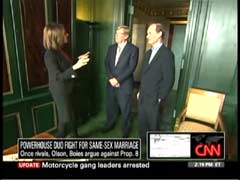 CNN senior political analyst Gloria Borger returned to her roots as a slanted journalist on Wednesday's Newsroom with a glowing two-part report on Ted Olson and David Boies, the former rivals in Bush v. Gore who are now fighting to overturn California's Proposition 8, which outlawed same-sex "marriage." Borger portrayed their coalition as "a script that could have been written in Hollywood."

Anchor T. J. Holmes introduced the first part of the analyst's report just before the bottom of the 1 pm Eastern hour. After noting that closing arguments had begun in the lawsuit against Proposition 8, Holmes stated that the challenge was "the story of two powerhouse lawyers who have turned the partisan divide on its head. Ted Olson, a Republican, and David Boies, a Democrat, famous arch rivals in Bush v. Gore, have now joined together in this fight. It reads like a novel, which may explain why Hollywood had a lot to do with it."

Borger, who, before joining CNN as an analyst in 2007, served as a political correspondent for CBS News, continued on the Hollywood theme: "It's a script that could have been written in Hollywood. The opening shot? A lunch in the Polo Lounge at the Beverly Hills Hotel, and it starts where you might expect, with a Hollywood heavy hitter: director and actor, Rob Reiner." She featured Reiner, a well-known liberal, throughout the first part of her report, as well as Chad Griffin, a former Clinton administration staffer turned activist for same-sex "marriage."