VIDEO The Media Uses The Left's Talking Points Against Kavanaugh

The left has been in a frenzy since Judge Brett Kavanaugh’s nomination to the Supreme Court on Monday. They’ve found their ammunition against the nominee in a in a 2009 article for the Minnesota Law Review written by Kavanaugh, in which he argued that a president should be exempt from investigation and civil suits until they are out of office or impeached and removed from office. The D.C. Circuit Court judge noted in the article that it would take an act of Congress to change the law, which would take pressure off the shoulders of those who have the world’s most stressful job.

On Monday, the morning and evening newscasts of ABC and NBC failed to highlight, in their coverage of the death of Supreme Court Justice Antonin Scalia, that Democratic Senator Chuck Schumer’s decision to come out in support of whomever President Obama nominates flies in the face of what he said in 2007, 18 monhs before the end of the presidential term, about vowing to block any Supreme Court nomination by then-President George W. Bush.

In speech at the National Press Club on Tuesday, New York’s senior Democratic Senator Chuck Schumer expressed regret over how Democrats handled their large majorities following the 2008 election in passing ObamaCare when they should have focused first on economic issues to address the recession.

Since then, the remarks have received no coverage from any of the “big three” in ABC, CBS, and NBC on either their respective morning or evening newscasts in a situation that undoubtedly would not be the case if a Republican Senator had expressed doubts about an initiative by a Republican-controlled Congress and White House. 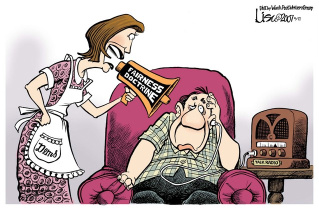 Those blue meanies over in conservative talk radio, "progressive talker" Ed Schultz opined yesterday. There they go again, Schultz sighed, making a fuss for hardly any reason over possible reimposition of the so-called "Fairness Doctrine."

Here's what Schultz had to say (click here for audio) --

It's been interesting and I have listened to it more in the last couple of days than I have in a long, long time and that is the right-wing talkers of America and how they're ginning up this story about the Fairness Doctrine. So I'm going to be a little bit selfish here today about our industry because now there seems to be an attack on the reason why Barack Obama was elected is because the liberal media and the bias in the media has taken him to the doorstep of the White House and now they're attacking conservative talk radio. My Lord, these people are just, they are relentless when it comes to fear-mongering. You know what, I should be the one sitting here just pounding the drums for the Fairness Doctrine, the way that we have been able to be successful in recent years and stay afloat when we weren't given 90 days. I mean, if they were to put in the Fairness Doctrine, who do you think would benefit? I would make more money. Let me just be right up front about that. I'm not sure it's the right thing to do. I've never paid much attention to it.