While liberal media outlets are slamming Al Gore for hypocrisy over selling his cable network to a Middle East oil magnate, one would "have every reason to not just criticize but condemn Al Gore for selling Current TV to Al Jazeera," because of a far greater reason. It is "a radical pro-Islamic enterprise that is regularly promoting anti-Americanism," NewsBusters publisher Brent Bozell told Fox News's Sean Hannity on the January 31 Hannity program.

"Al Jazeera is owned by the emirate of Qatar" which is "openly endorsing and supporting [terrorist networks] Hamas and Hezbollah." In fact, the father of the late Daniel Pearl -- who was murdered by Islamists -- "is calling for a congressional investigation," Bozell noted. In spite of this, "national security has nothing to do" with the liberal media's outrage, "it's the stupid global warming argument!" [watch the full "Media Mash" segment below the page break]

CBS Shills for Dem Senator Accused in Prostitute Scandal, Wonders If It's a 'Smear Campaign'

ABC on Wednesday and Thursday continued to ignore the developing prostitution scandal surrounding Democratic Senator Robert Menendez. NBC highlighted the story on the Today show. CBS covered the story, but reporter Jan Crawford suggested the allegations have "all the earmarks of an orchestrated smear campaign."

ABC's World News on Wednesday and Good Morning America on Thursday skipped the news that federal agents are removing evidence from the office of Solomon Melgen, a Florida doctor who flew Menendez on trips to the Dominican Republic. There, the New Jersey senator allegedly engaged prostitutes. On CBS This Morning, Crawford charitably explained, "Now, on the one hand, they've got all the earmarks of an orchestrated smear campaign. But the question is, are they true?" [See video below. MP3 audio here.]

Jay Leno did something Tuesday most media members up to that point hadn't done.

On NBC's Tonight Show, the host actually reported - albeit with jokes, of course - the FBI's investigation of Sen. Robert Menendez's (D-N.J.) alleged involvement with Dominican prostitutes (video follows with transcript and commentary):

On Sunday’s edition of ABC’s The Week, Martha Raddatz managed to conduct a six minute-long interview with Democratic Senator Bob Menendez (N.J.) without asking a single question about an FBI investigation into allegations that he slept with underage prostitutes while in the Dominican Republic. Instead Raddatz lobbed softball questions at Menendez about Secretary of State Hillary Clinton’s performance during the Benghazi hearings, immigration reform, Chuck Hagel, and the upcoming Senate race in New Jersey.

On Friday it was revealed that the FBI is investigating Sen. Robert Menendez (D-N.J.) for allegedly sleeping with underage prostitutes in the Dominican Republic.

Despite this, when Menendez was given a six-minute interview with Martha Raddatz on ABC's This Week Sunday, he was not asked one question about the investigation or the allegations (commentary follows with full transcript at end of post):

Democratic Senator Bob Menendez of New Jersey seemed absolutely shocked and appalled Tuesday afternoon, when MSNBC anchor Tamron Hall kicked off their interview on comprehensive immigration reform by asking him about breaking news from the Associated Press regarding the arrest and deportation order against an intern in the senator's office who is a registered sex offender. According to the report, the arrest was deliberately timed to fall AFTER the November 6 presidential election.

"Do you know anything about this report, senator," Hall asked a visibly annoyed Menendez.  "We certainly wouldn't have known through any background checks since he is a minor about any sex offender status," Menendez insisted, "and once it came to our attention, our New Jersey staff director let the young man go from the program." [MP3 audio here; video follows page break]

Did We Forget About Sen. Bob Menendez's (Alleged) Solicitation of Prostitutes in the Dominican Republic?

As the discussions about sex and sex scandals dominate the media due to the Petraeus affair, one affair the media are strangely silent about is that of New Jersey Sen. Robert Menendez, who was handily reelected last week despite shocking allegations that his idea of an Easter vacation was flying to the Dominican Republican to soliciting sex from prostitutes. Oh, and, like Secret Service agents in Colombia before him, the hookers are saying that he stiffed them on the tab.

The latest development in the Menendez saga, according to Scott Wong at Politico is that:

FNC included a soundbite of Menendez in the opening teaser, as co-host Alisyn Camerota asked if the "hostile words" of Democrats would "hurt negotiations." On ABC, correspondent David Kerley included a clip of the "tough language," and co-host Bianna Golodryga gave Republican Senator Orrin Hatch a chance to respond as the Utah Senator appeared as a guest. Golodryga: " I want to begin by asking your response to that dramatic language we heard from your Democratic counterpart, Senator Menendez, basically calling Republicans terrorists with regards to the process of tax cuts."

SENATOR BOB MENENDEZ (D-NJ): It's almost like the question of: Do you negotiate with terrorists?

I was preparing to applaud the Obama administration and specifically Homeland Security Secretary Janet Napolitano for announcing the deportation of a record number of criminal aliens last year. According to the Washington Times, "the U.S. Immigration and Customs Enforcement deported 392,862 aliens in fiscal year 2010, slightly less than a 1 percent increase over 2009 but short of the agency's goal to remove 400,000 this year."

What curbed my enthusiasm was news that removal of other illegal immigrants -- those not convicted of crimes, though it could be justifiably argued that their status as illegal immigrants is, by definition, the breaking of American law -- fell to the lowest number since 2007.

Dan Stein, president of the Federation for American Immigration Reform (FAIR), said that while it is nice that Secretary Napolitano believes removing people in the country illegally is an important function for the Department of Homeland Security, "policy directives from the highest levels of DHS clearly demonstrate that the administration is refusing to enforce laws against noncriminal aliens."

That bad cop/good cop approach is designed to pacify those on the political right while the administration and some Democrats in Congress simultaneously lay the groundwork for legalizing those who broke our laws to get here and remain in the country illegally. 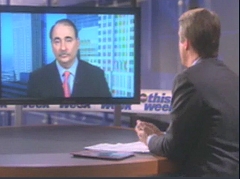 Two Democrats on Sunday blamed the soaring budget deficit on George W. Bush, and ABC's Terry Moran didn't challenge either one of them.

Moran didn't challenge this, nor did he press Sen. Robert Menendez (D-N.J.) when he uttered virtually the exact same Democrat talking point moments later, "When George Bush came to office, he had a $236 billion surplus; Barack Obama was handed a $1.3 trillion deficit."

Here's how a REAL journalist might have responded the second time somebody made the same stupid comment in the course of about 15 minutes:

Washington Post reporter Sholnn Freeman frontloaded his October 31 business section front page article, "Airfare Surcharges Stay Despite Oil Price Drop," not on examining the valid business reasons for why some airlines retain the fee but in citing a liberal politician seeking to grandstand the issue.:

When oil prices were rising rapidly, many financially-strapped airlines started adding special surcharges to ticket prices to cover the bill. So now that oil prices are falling, are the fees coming off? Not yet.

The lag is drawing complaints from air travelers, consumer watchdogs and a member of Congress. Sen. Robert Menendez (D-N.J.) is sending a letter to U.S. Transportation Secretary Mary E. Peters asking the department to investigate whether the charges "have any basis in reality or if they are being used to mislead travelers, reduce competition and increase fares."