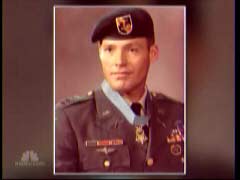 On Monday’s NBC Nightly News, anchor Brian Williams updated viewers on possibly the most decorated American war hero of the modern era, Colonel Robert Howard, as the Vietnam War veteran was laid to rest in Arlington National Cemetary. Williams had taken a moment on his show in December to commemorate his passing. On Monday, Williams recounted: 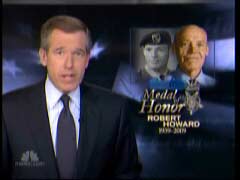 On Wednesday’s NBC Nightly News, anchor Brian Williams took a moment to remember Vietnam War veteran, retired Colonel Robert Howard, who was awarded many honors for his heroic service, including the Medal of Honor, eight Purple Hearts, four Bronze Stars, and two Dinstinguished Service Crosses. Williams began his tribute: "We have a brief special word tonight about a very special man whose story you should know about, in part because his story will be told for generations to come. Robert Howard might have been the toughest American alive while he was among us. Bob was the only man ever to be nominated for the Medal of Honor three times for three separate acts of staggering heroism in combat."

After recounting some of the honors bestowed upon Colonel Howard, Williams related: "It's believed Bob Howard was the most heavily-decorated American veteran of the modern era, period."

The NBC anchor further recounted: "In one 54-month period he was wounded 14 times. He served five tours of duty in Vietnam. And in recent years, he loved his trips to Iraq and Afghanistan to visit the men and women in uniform and in the fight there."