With French President Emmanuel Macron in Washington, D.C. for an official state visit, the liberal media were eager to pounce on any seemingly awkward “bromance” moments he and President Trump shared. And since Macron’s arrival, the two world leaders have exchanged seemingly countless handshakes and shoulder grabs (including Trump joking about brushing dandruff off his guest’s shoulder). Of course, former Republican Nicolle Wallace used her MSNBC show Deadline: White House to take a classless shot at the President’s marriage.

As though it was a running theme for MSNBC on Wednesday night, multiple expert panelists acted as though they couldn’t understand why the public has trust issues with former UN Ambassador Susan Rice. “And one thing [President Donald Trump] said in the interview that is true, Susan Rice is not a particularly polished public performer,” declared New York Times journalist Glenn Thrush on Chris Matthews’ Hardball.

Now it's true that Gibbs couched her remarks in terms of Stengel's role in both jobs being that of telling "America's story around the world." More accurately, Gibbs might have said that Stengel has always seen his job as telling Barack Obama's story in the most favorable light.  View the video after the jump.

Corrected from earlier | Time magazine managing editor Richard Stengel appeared on the September 27 Morning Joe to give viewers a preview of the latest issue of the magazine, the cover story of which is devoted to Mitt Romney's Mormon faith. At the tail end of the segment, teasing other articles in the issue, Stengel plugged Bobby Ghosh's interview with Mohammed Abdel Rahman, the son of Omar Abdel Rahman, the "blind sheikh" serving time in a federal prison for his role in aborted 1993 bombing plot targeting the World Trade Center.

"We have a great piece by Bobby Ghosh, who's been on here before about the rise of the Salafis, in the Middle East, they're the Tea Party of Muslim democracy, and that's a fantastic, insightful story as well," Stengel noted. Neither Joe Scarborough not co-host Willie Geist threw a penalty flag at Stengel's unnecessary roughness, comparing the Tea Party to radical advocates of stringent Sharia law. [MP3 audio here; video at bottom of post]

The Best Notable Quotables of 2011: Battle of Our Readers vs. Media Experts

It's always interesting to see how the several thousand readers who voted in the MRC's "public ballot" differed from the 48 media experts who selected our Best Notable Quotables of 2011 (a panel which included talk radio hosts Mark Levin and Neal Boortz, Human Events editor-in-chief Tom Winter and Boston Globe columnist Jeff Jacoby). This year, there were six categories where our readers and the judges disagreed -- although sometimes the margins were extremely close.

Let's start with the biggest disagreement, in the "Media Millionaires for Higher Taxes Award." By a healthy margin (68 to 53), our judges chose an April 17 quote from CBS's Bob Schieffer, as he was questioning Rep. Paul Ryan on Face the Nation: "Why do these rich people need another tax cut? I mean, they’re already rich....Why cut their taxes some more?"

Following Time managing editor Rick Stengel revealing the magazine's "Person of the Year" to be "The Protester" on Wednesday's NBC Today, co-host Ann Curry attempted to compared the Arab Spring democracy movement in the Middle East to Occupy Wall Street: "Are there links between what had happened in the Arab Spring...and also what's happening now on Wall Street and all across this country?" [Audio available here]

Also noting the suppressed 2009 Green Movement in Iran and the recent election protests in Russia, Curry added: "...there seems to be this kind of global protest." Stengel enthusiastically agreed with Curry's comparison: "Absolutely. There's this contagion of protests....what happened in the Arab world did influence Occupy Wall Street and Occupy Oakland and the protests in Greece and Madrid." [View video after the jump]

In Time Magazine Managing Editor Rick Stengel's mind, it's really "sad" that the wall between Israel and the West Bank - intended to keep murderous terrorists in the Palestinian territory - has been a success. Stengel apparently considers Isreali deaths worthwhile if they lead to more productive peace talks.

In a "Morning Joe" segment yesterday titled "Why Israel doesn't care about peace" - after the upcoming Time cover story - Stengel posited that the lack of violence in Isreal is responsible for that country's supposed reluctance to reach a peace deal. Stengel stated (video below the fold - h/t Jim Hoft):

They haven't had a car bombing in two and a half years. And the sad truth really is that the wall with the West Bank has actually worked. I mean, most Israelis in the course of their lives don't come into contact with any Palestinians at all. The wall is functioning. And the Gaza strip is so small and so isolated they feel that those folks, the Hamas folks are not that big of a threat...

I mean, the Israelis feel like, you know what? The status quo isn't so bad and we don't mind is there is no peace at all. 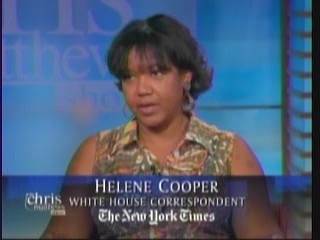 Barack Obama's presidency goes the way of Jimmy Carter's if he doesn't get control of the oil spill in the Gulf of Mexico.

So said New York Times White House correspondent Helene Cooper on the most recent installment of "The Chris Matthews Show."

As the opening segment's discussion concerning the spill moved to a close, the host surprisingly asked his panel if  Obama can continue to "blame the previous administration, the oil patch guys, Bush and Cheney" for the disaster.

Readers will likely find the answers quite surprising (video follows with transcript and commentary):

He is, after all, the man who informed the world that his ascendancy would be seen as the moment that "the planet began to heal."  So I suppose it's fitting that his logo appear on the World Cup soccer ball, the event that will be watched by more people than any other event in human history.

Could that be what Time magazine was thinking?

Check out the image of the ball on the cover of this week's Time, and compare it to the Obama logo, seen after the jump.  Compare the Time ball, too, with an image of the actual ball, to which it bears absolutely no relation.

'Press Wouldn't Cover Sestak Story If Rahm Announced It On Pennsylvania Ave. In A Speedo'

By Mark Finkelstein | May 28, 2010 7:35 AM EDT
Just how desperately does the MSM want to bury the Sestak job-bribe story?  Yesterday we reported Time editor Rick Stengel's risibly feigned ignorance of the matter.

On Morning Joe today, Joe Scarborough broke off a colorful metaphor to describe the liberal media's see-no-evil approach to the subject, saying the MSM wouldn't cover the story "if Rahm Emanuel announced it in the middle of Pennsylvania Avenue wearing nothing but a Speedo."

Mika Brzezinski broached the subject by mentioning that she had gotten "hammered" by her husband and friends for her criticism of the MSM's failure to ask the tough questions on the matter.

As a Sunday afternoon treat, here’s a sneak peek at the May 17 edition of MRC’s Notable Quotables newsletter, our bi-weekly compilation of the latest outrageous, sometimes humorous, quotes in the liberal media. The entire edition will be posted, with five video clips, at www.MRC.org on Monday morning.

“Big problems. Big achievements. Big costs. Historians say President Obama’s legislative record during a crisis-ridden presidency already puts him in a league with such consequential presidents as Lyndon Johnson and Franklin Roosevelt. But polls show voters aren’t totally on board with his achievements, at least not yet, and the White House acknowledges that his victories have carried huge financial and political costs. ‘There are always costs in doing big things,’ Obama told USA Today.”
— Opening of May 12 USA Today cover story by Susan Page and Mimi Hall, “Will doing ‘big things’ wind up costing Obama?” The accompanying picture showed a portrait of Abraham Lincoln peering down at President Obama.

Life was hell under Bush.  But hang in there: things'll get better under Obama.

Class dismissed: that's really all you need to know about the latest Time cover story—The Decade From Hell And Why The Next One Will Be Better.  But just to drive home the Manichean message, Time editor Rick Stengel and Andy Serwer [of Time stable-mate Fortune], who wrote the cover story, appeared on Morning Joe today.

Of course there's the inconvenient detail about Barack Obama having been elected in this decade.  But not to worry.  Serwer suggests we "see Barack Obama being elected as the beginning of the next decade."

Excerpts from the pro-Obama babble . . .