On Thursday, Forbes's Robert Lenzner claimed the U.S. needs a second stimulus, and CNN's financial gurus Richard Quest and Ali Velshi were content not to challenge his point. Velshi even acknowledged later that the country needs to "stimulate employment" through tax benefits to small businesses.

"What we really need, but unfortunately we're politically behind the eight-ball is, we need an enormous stimulus program of say, $200 billion to put to work all these people from the construction trades and building and real estate that are out of work," Lenzner insisted.

William F. Buckley Jr. once said his job was to "stand athwart history, yelling stop!" If more liberals took this advice, they wouldn't end up looking like two CNN anchors who just don't know when to say no to unsustainable deficit spending.

On the eve of a disappointing jobs report in which the unemployment rate rose to 9.1 percent, CNN International's Richard Quest plowed ahead like the helmsman of the Titanic in calling for "classic Keynesian economics" to salvage the foundering economy.

CNN: Pinstriped Suits Are Out Because 'Bankers Reaping Bonuses' Wear Them 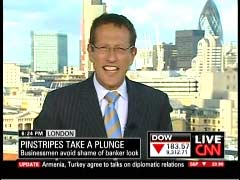 Correspondent Richard Quest made a frivolous attempt to tie the bad economy to men’s fashion on CNN’s Newsroom program on Tuesday. Quest proclaimed that pinstriped business suits are “old-fashioned...and out of touch with reality....because they are the pinstripe of bankers.” He continued that if you wore such attire, “you may be mistaken for one of those bankers reaping bonuses.”

Anchor Kyra Phillips introduced the CNN correspondent just before the bottom of the 1 pm Eastern hour, noting that “the global financial crisis has taken a toll everywhere, including men’s suits. That old business stand by, the pinstripe- well, it’s being hit especially hard.” Phillips turned to Quest, who immediately started joking around with his colleague. One might have guessed that Jeanne Moos, the network’s usual purveyor of light reports, was away on a late summer vacation, so they got the British correspondent to stand in for her. 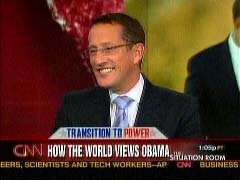 During Friday’s Situation Room, CNN correspondent Richard Quest predicted that the international community would react favorably if Hillary Clinton would become the next Secretary of State: "Absolutely amazed, outstanding reaction -- I’ve little doubt. Remember, Hillary Clinton is an international superstar, known around the world. There would be some reservations, bearing in mind everyone saw the bruising Democratic primary....But no question, the gravitas -- the authority that she would bring would be welcomed around the world." He later made a bizarre analogy about European reaction to the election of Barack Obama: "You’re talking about people who have been like starving men, who have suddenly been given a food [sic] and a meal and it tastes brilliant to them." Imagine for a moment that a Fox News reporter was arrested in Central Park early in the morning with a rope around his neck that was tied to his genitals. Do you think this little nuance would be included in press coverage of this bizarre event?

Probably in the headline and the opening paragraph, right?

Well, for some reason, though news outlets did report the odd happenings in NYC Friday morning when CNN's Richard Quest was officially arrested for loitering and drug possession, from what I can tell, only the New York Post included the "kinky" elements in its article Saturday (emphasis added, h/t NBer Gat New York, picture courtesy CNN):