AP, in Playing Defense for Blumenthal, Disses the New York Times (But It All Looks Very Convenient)

By Tom Blumer | May 19, 2010 12:22 PM EDT
Earlier this morning, I was minding my own business, reading this unbylined Associated Press roundup of yesterday's elections, when I got to the report's final few paragraphs. They involved "other concerns" the two major parties have. After noting yesterday's resignation by Republican congressman Mark Souder, the report's final paragraph read as follows:

Well, that's rich. I wonder how the folks at the New York Times, which prepared the 2,100-word article ("Candidate’s Words on Vietnam Service Differ From History") to which the AP refers, feel about their august publication being called merely "a newspaper"? Or about the Blumenthal campaign press release disguised as a news report the wire service's Susan Haigh put forth yesterday? Or is there more going on?

As to Blumenthal's "dispute," here's a clue for both the AP and the Nutmeg State's AG: There is no "dispute." There are only these facts and direct quotes: 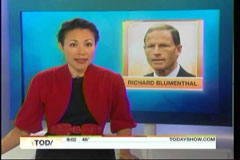 CBS's Early Show on Tuesday completely ignored the front page New York Times story on Democratic senatorial candidate Richard Blumenthal and his claims to have "served in Vietnam," despite having never done so.

NBC's Today mentioned the subject once in a news brief, but anchor Ann Curry described the Connecticut Democrat only as a "U.S. Senate candidate." On ABC's Good Morning America, co-host George Stephanopoulos described the development as a "huge story."

Yet, the show devoted less than a minute to the topic. Unlike the Early Show, however, Stephanopoulos at least used a party label, explaining that "this was considered a safe Democratic seat. Now, it could be in play."

Fox News Channel host Glenn Beck has already shown he's a rating success and is leaving a mark in cable news. However, he may have pulled one of his most successful performances yet.

Beck interviewed Connecticut Attorney General Richard Blumenthal on his March 30 broadcast. But, the radio and TV host took the opportunity to tell Blumenthal what he thought of his investigation into the bonuses received by American International Group (AIG) executives - whose company received federal bailout money.

Leave it to resident CNBC loose cannon Jim Cramer to take it upon himself to call a spade a spade or a red a red.