The irony is lost on no one when a member of the media elite criticize the intelligence of anyone outside of their liberal bubble. Especially when the person they are criticizing is President Trump, who has amassed a billion-dollar empire and graduated from the Ivy League Wharton Business School. One would presume it is impossible to accomplish so much success without ever picking up a book, however, this is precisely what Trevor Noah implied on The Daily Show Monday night.

ABC and CBS's evening newscasts on Friday spotlighted the friendly transatlantic trash-talking between the British and American heads of state. However, the programs failed to cover the latest too-close intercept of American military assets by Russian aircraft. On World News Tonight, ABC's David Muir touted "the royal mic drop — the Queen and Prince Harry responding to the First Family's challenge" over the upcoming Invictus Games for wounded veterans. On CBS Evening News, Scott Pelley trumpeted that "it's not often that the Queen gets involved in a Twitter war. She and Prince Harry traded barbs with President and Mrs. Obama."

This week marks the 800th anniversary of the Magna Carta “one of the most important documents in human history” and on Monday, ABC’s Good Morning America and NBC’s Today apparently felt their viewers don't appreciate a key part of world history and skipped the event altogether.

As of 5pm ET on Friday, August 1, CNN has yet to cover the investigation into New York Governor Andrew Cuomo over his possible obstruction of a commission trying to expose political corruption in the Empire State's government. Instead, New Day, the network's morning show (which is co-anchored by the governor's brother, Chris Cuomo) has covered seemingly more important stories, such as the controversy surrounding the NFL's two-game suspension of Baltimore Ravens running back Ray Rice.

The New York Times broke the Cuomo investigation on July 23. Since then, the only Big Three morning or evening newscast to cover the story has been CBS This Morning. The morning show aired a full report on Friday about the possible witness tampering. Fox News Channel's Carl Cameron also covered the scandal on Friday's Happening Now: [video below the jump]

Both ABC World News with Diane Sawyer and NBC Nightly News failed to mention a new, troubling report from the Census Bureau on Thursday night that sales of new homes decreased by 8.1% in June and that May’s originally reported double-digit increase was revised lower, from almost 19% to only 8%.

The CBS Evening News did cover this story, but it only was in the form of a 12-second news brief from anchor Scott Pelley. Pelley grimly reported that: “Today's report on the housing market is raising concerns about the economic recovery. Sales of new homes dropped sharply last month, more than 8%, and that's the largest decline in nearly a year.” [MP3 audio here; Video below]

NBC's Mitchell: Queen Had to 'Put Up With' the 'Indignity' of Celebrating U.S. Bicentennial

As part of NBC's wall-to-wall Today show coverage of Britain's Queen Elizabeth II celebrating her Diamond Jubilee on Tuesday, chief foreign affairs correspondent Andrea Mitchell listed ways in which the United States has supposedly slighted the monarch over the years: "...she's put up with a lot from her former subjects. The indignity of going to where the revolution started, to celebrate the bicentennial of our independence from the monarchy." 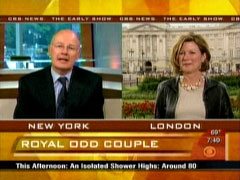 The CBS Early Show continued its usual fawning over Michelle Obama as co-host Harry Smith declared: "They couldn't come from more diverse backgrounds. One grew up in Chicago. The other grew up with a silver spoon...this new royal odd couple, the First Lady and the Queen."

Correspondent Sheila MacVicar reported on the First Lady’s relationship with the Queen: "It’s a friendship that began in April with this encounter between Britain’s Queen Elizabeth and Mrs. Obama. A meeting so congenial that at a later reception, as they apparently compared their shoes, the two embraced. That meeting ended with a request from Her Majesty that the First Lady keep in touch. And apparently she has, by letter and phone."

MacVicar went on to describe Michelle Obama’s latest visit with the Queen while in Europe last week: "They spent three hours in the palace and its gardens, including the Queen's new vegetable patch. That's one interest both share. And that is forging a new friendship, helping to keep the trans-Atlantic relationship very warm indeed. In fact, a source with excellent royal connections tells CBS News that the Queen has told members of her family that she adores Michelle Obama and that she hopes she gets to see her again soon."

Do you remember hearing about a BBC documentary about Queen Elizabeth II this summer? During filming, Her Majesty walked out of the room in a huff when photographer Annie Leibovitz asked her to remove her crown for a photo. This is the stuff tabloid dreams are made of, and they had a field day with this tasty tidbit. But apparently it never happened: selective editing of the film footage in the trailer, which was shown to journalists, made it seem as though it did.