FNC's Brit Hume highlighted Monday night how Scott McClellan's original book proposal, posted Saturday by the Politico, “promised to be quote 'supportive of the President' and take a penetrating look at how the liberal media slant their coverage of him.” Interviewing McClellan on Sunday's Meet the Press, Tim Russert highlighted the proposal and declared: “That's not the book you wrote.” (Matt Sheffield's Monday post on the Politco's discovery, “McClellan Originally Wanted to Attack Media, Defend Bush.”)

In his “Grapevine” item, Hume relayed how “McClellan writes that while many recent books have portrayed President Bush in a negative light, he would take a different approach, quote: 'I will directly address myths that have been associated with him, some deliberately perpetuated by activist liberals and some created by the media'” and:

I will look at what is behind the media hostility toward the President and his administration, and how much of it is rooted in a liberal bias.

Peter Osnos, the liberal founder of PublicAffairs books who “worked very closely” with Scott McClellan on his anti-Bush screed which has enraptured the news media, denied, the Washington Post reported Friday, that McClellan had “undergone heavy-handed editing,” but in maintaining that he had not steered McClellan to write anything he didn't believe, Osnos exposed a political agenda as he conceded he had no interest in a pro-George W. Bush book. Equating criticism of the Bush administration with “integrity and candor,” Osnos, the former Washington Post reporter and editor who in March denounced Rush Limbaugh as “bombastic, aggressive, and mean,” told the Post:

We are journalists, independent-minded publishers. We weren't interested in a book that was just a defense of the Bush administration. It had to pass our test of independence, integrity and candor.

By Mark Finkelstein | May 29, 2008 9:03 AM EDT
Was George Soros behind the publication of Scott McClellan's book? Meredith Vieira had the perfect opportunity this morning to find out—but chose to punt. The Today co-anchor certainly had the time: her much-touted exclusive interview with the author of What Happened ranged over the show's first two half-hours. But even when McClellan himself put the issue on the table—citing his publisher by name and alluding to its philosophy—Vieira failed to pursue a line of questioning that could have put matters in an explosive new light.

is part of the Perseus Books Group, which also owns Nation Books, “a project of The Nation Institute” which publishes the magazine of the same name, and Vanguard Press, whose home page now features The Prosecution of George W. Bush for Murder, a new book by Vincent Bugliosi that “presents a tight, meticulously researched legal case that puts George W. Bush on trial in an American courtroom for the murder of nearly 4,000 American soldiers fighting the war in Iraq.”

Baker also notes that PublicAffairs is the publisher of no fewer than six books by Soros himself, and that McClellan's editor, Peter Osnos, who acknowledges having "worked very closely" with the author, is a liberal pundit in his own right.

Finally, Little Green Footballs has documented that there are several Perseus companies that actually include "Soros" as part of their name, as in Perseus-Soros Management, LLC.

Put it all together, and there's every reason to wonder whether Soros isn't behind McClellan's manifesto. But given the golden opportunity to pursue the matter, Meredith chose to move on. Here's the relevant exchange, which came during the second half-hour of this morning's Today. 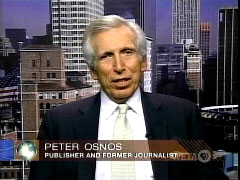 Peter Osnos, who wrote Wednesday that he “worked very closely” with Scott McClellan on McClellan's new book published by PublicAffairs which Osnos founded, is a liberal whose publishing house is affiliated with the far-left The Nation magazine and the publisher of The Prosecution of George W. Bush for Murder.