VIDEO CNN Panelist Scolds: 'We Cannot Have a Grown-Up Conversation' on Spending

Following the White House’s release of a proposed federal budget on Thursday the liberal media went into a frenzy as they framed it as an assault against old people, the poor, and cancer research. But according to The Federalist’s Mary Catherine Ham on Sunday’s Inside Politics, that’s the childish behavior Washington had become known for. “No one wants to cut anything,” told the CNN panel, “And I think that was the most revealing thing, as it often is, that we cannot have a grown-up conversation about actually making priorities in government.”

MSNBC’s Hardball host Chris Matthews made his feelings clear on Tuesday night about the latest revelations in the Hillary Clinton e-mail scandal as he expressed his hopes that they just turn out to be pleas by Huma Abedin, Anthony Weiner or even Hillary Clinton to “remember to pick up bread on the way home.”

On Thursday's MTP Daily on MSNBC, during a discussion of recent high-profile cases of black suspects being shot and killed by police, panel member April Ryan of American Urban Radio Networks made a blatantly wrong claim that the "vast majority" of criminal suspects who were killed by police officers in 2015 were black. In fact, the source that she actually cited -- the Washington Post -- found that twice as many whites as blacks were killed by the police in 2015. Neither host Chuck Todd nor the other two panel members -- Matt Bai of Yahoo News and Perry Bacon of NBC News -- took the time to correct her.

Anchoring live coverage of the death of Antonin Scalia on Saturday night, MSNBC’s Ari Melber whined that the GOP not approving a successor to the conservative would impede the “governing of the country.” Reporter Perry Bacon agreed, echoing Democratic talking points: “I think you're right. I think you're already hearing that.”

In what amounted as the only significant whiff of criticism of former Secretary of State Hillary Clinton on Monday's Hardball program, NBC News senior political reporter Perry Bacon noted that the failure of bama/Clinton foreign policy was the reason that Clinton is not emphasizing her four years at Foggy Bottom on the campaign trail.

On Sunday’s Meet the Press, an all liberal panel repeatedly took shots at the Republican Party over its support for religious freedom laws with Amy Walter of the Cook Political Report going so far as to suggest that on the issue on the issue of gay marriage “if we took everybody over the age of 50, and just moved them out of this country, this wouldn't be an issue at all.”

'It's Like Obama's Got Ebola,' Matthews Declares About Candidates Avoiding President

During Tuesday night's edition of Hardball on MSNBC, liberal host Chris Matthews vented his exasperation regarding the many Democratic candidates running across the country in this year's election who are distancing themselves from the unpopular current occupant of the White House.

“It's like Obama's got Ebola,” he said, referring to the deadly disease that originated in West Africa and has spread to the United States and other nations around the world.

A recent Washington Post report handed MSNBC an opportunity to blame their rivals for the disastrous rollout of ObamaCare, and the Lean Forward network appears to be taking advantage.

On Monday’s The Cycle, MSNBC contributor Perry Bacon was on to discuss Saturday’s report that fear of Republican criticism caused the Obama administration to work slowly and secretively on the development of Healthcare.gov. Bacon summed up the White House’s political concerns like this:

Today marks the opening of the 38th annual Conservative Political Action Conference (CPAC). Regardless of where you may stand on internal debates about some of this year's co-sponsors, there's no denying that for nearly four decades its been an enduring legacy of conservative political activism.

But to liberal journalists like Time's Adam Sorensen, CPAC is casually dismissed as a "three-day carnival of Republican ladder-climbers and red meat throwers."

"Tea Party or no, red meat is always the entree du jour at these kinds of events," Sorensen noted later in his February 10 Swampland blog post. "In a year before a presidential election, speeches from potential candidates promise heaping helpings."

This afternoon, the Washington Post's Web site offers readers two looks at how the Democrats and the GOP will proceed following the 2009 elections, but, surprise, surprise, the paper only forsees internecine squabbles for the GOP.

"Republicans revel in wins but ideological fissures loom," the headline to Washington Post staffer Philip Rucker and Perry Bacon's news piece filed at 2:30 p.m. EST today. On the other side of the coin, the Post offered an "analysis" piece from Dan Balz published shortly after 10 a.m. today that posits that the "Contests serve as warning to Democrats: It's not 2008 anymore."

Even before delving into the content of the articles, it's clear by the  labeling that the Post sees the GOP's pending "ideological fissures" as a matter of objective news reporting, while the Democratic postmortem is a matter of informed "analysis," not hard news.

For their part, Rucker and Bacon aimed, like others in the mainstream media -- click here, here, and here --  to gin up an ominous narrative for the GOP party-wide from the New York 23rd congressional district saga:

It’s uncommon for newspapers to hype Sunday morning TV interviews in advance, especially if presidents aren’t involved. But Saturday’s Washington Post carries this page 3 story: "In TV Appearance, Powell Plans to Answer Right-Wing Critics." Reporters Michael D. Shear and Perry Bacon Jr. play up a GOP feud: "Under intense fire from the right, former secretary of state Colin L. Powell is preparing to answer his Republican critics this weekend in a television appearance that is likely to add fuel to his long-standing feud with top conservatives in his party."

Message to liberal Post readers: the conservatives are going to get thrashed tomorrow on CBS's Face the Nation, so don’t miss it.

Shear and Bacon didn't tell readers that this "feud" was fueled by the liberal media, by CBS Face the Nation host Bob Schieffer, who asked former vice president Dick Cheney whether Powell or Rush Limbaugh was a better voice for Republicans. They only explained "Rush Limbaugh and former vice president Richard B. Cheney have attacked Powell in recent days as a traitor to his party."

Contessa Brewer: Republicans 'Think Americans Are a Bunch of Idiots' 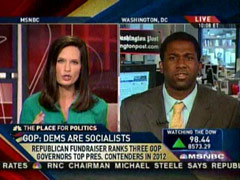 MSNBC host Contessa Brewer derided Republicans for using the word socialist in reference to Barack Obama's economic policies on Wednesday, complaining, "Well, maybe they think Americans are a bunch of idiots." Speaking of an upcoming vote by the Republican National Committee over whether or not to label the current Democratic leadership as socialist-leaning, the "MSNBC News Live Host" worried, "Have we reverted to a bunch of junior high schoolers, 12-year-olds with the name calling?"

Of course, Brewer is on the same network that repeatedly, and gleefully, used the juvenile "tea bag" humor to describe Republican protests over taxes. So, this argument is somewhat hollow. Washington Post political reporter Perry Bacon talked to the host and tried to explain the GOP's anger towards the massive spending that has been going on in Washington. After Brewer played a clip of RNC Chairman Michael Steele on Tuesday slamming Democrats, such as "Barney Frank, who nobody understands," the journalist could barely contain herself. She fretted, "Class and dignity. Was that it?"