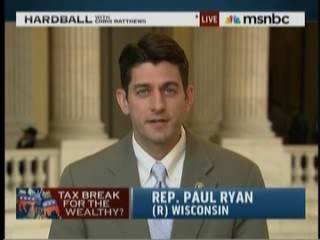 As NewsBusters reported Saturday, Krugman wrote an article the previous day castigating Ryan as "The Flimflam Man" calling the Congressman a "charlatan" and a "fraud" while claiming his "Roadmap" to balance the nation's budget was "drenched in flimflam sauce."

Krugman's criticisms of the Republican rising star were of course praised by all manner of media member from the shills at MSNBC to the sycophants in the liberal blogosphere.

Since then, Ryan has responded and responded well, first at the Milwaukee Journal Sentinel on Saturday:

Paul Krugman's Friday column in the New York Times attacked Rep. Paul Ryan of Wisconsin, who has dared to present an intellectually honest budget, as "The Flimflam Man." Joseph Lawler at the American Spectator calls it "unusually partisan even by Krugman's standards" and he's right; Krugman calls Ryan's efforts a "fraud," Ryan himself "a flimflam man" whose work is (zing!) "drenched in flimflam sauce." But Krugman's attack backfired when his main source for his argument, the left-of-center Tax Policy Center, disputed his claim of bad faith on the part of Ryan.

Krugman let his trademark petulance show, griping that the Washington Post was too nice to Ryan in a recent front-page article, and went further on his nytimes.com blog Friday morning, calling Post journalists economic ignoramuses: "One thing that has been overwhelmingly obvious in the discussion of Paul Ryan's roadmap is that lots of people who should know better -- including, alas, reporters at the Washington Post -- don't know how to read a CBO report." (Incidentally, Krugman, feeling the heat from non-fawning blog commenters offering substantive challenges to his glib economic assumptions, now limits the length of those comments.)

One depressing aspect of American politics is the susceptibility of the political and media establishment to charlatans. You might have thought, given past experience, that D.C. insiders would be on their guard against conservatives with grandiose plans. But no: as long as someone on the right claims to have bold new proposals, he's hailed as an innovative thinker. And nobody checks his arithmetic.

Which brings me to the innovative thinker du jour: Representative Paul Ryan of Wisconsin.

Chris Matthews on Monday got a much-needed lesson from Rep. Paul Ryan (R-Wisc.) on how tax hikes impact the budget as well as the economy.

"Congressman Ryan, is there any tax role for reducing our $1.4 trillion to $1.7 trillion debt this year -- deficit this year?" Matthews asked during the 5PM installment of MSNBC's "Hardball." "Is there any role in tax increasing to help do that job?"

With the ball nicely teed up, Ryan unleashed a drive down the middle of the fairway that would make Tiger Woods proud (video follows with transcript and commentary, h/t Twitter's @LFRGary):

Possible talking point: Rep. Paul Ryan. A recent speech has people talking, as it should. An excerpt: 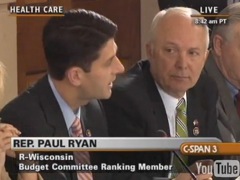 Speculation was rampant that today's health care summit could be a trap for Republicans. In fact, Republicans performed as well as they could have, given the hostile circumstances. The best part: the national media was compelled to cover it all.

The concern for the GOP going in was that President Obama, with his supreme oratory skills, would back the GOP into a corner and get them to agree to legislation out of sheer political necessity. The national news media would, of course, be lying in wait, cameras rolling, anticipating a slip up to fill the evening broadcasts.

But none came; at least on the Republican side. Rep. Paul Ryan, R-Wis., one of the GOP's fastest-rising stars, laid out the free market health care argument for the nation to see. He told the president and the American people (video embedded below the fold with partial transcript),

Armey: Dems Should Realize People Are Getting Info From Some Place Other Than MSNBC 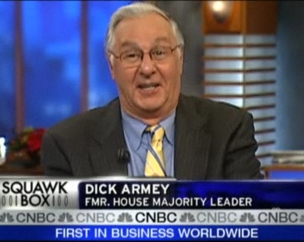 Dick Armey on Wednesday took a shot at MSNBC calling the cable television network a soft news source that panders to the Left.

The former House Majority leader was a guest host on this morning's "Squawk Box," and during an interview with Rep. Paul Ryan (R-Wis.) about a number of issues before Congress including healthcare reform, Armey took the opportunity to make a media bias comment.

Speaking about the Democrats, Armey said, "They need to understand they live in an Internet world now, and people are getting their information from some place other than MSNBC or other soft news sources that are pandering to the Left" (video embedded below the fold with partial transcript, relevant section at 7:15, h/t to Story Balloon for video find):

It worked for President Barack Obama in the 2008 presidential election, when he took tax cuts - a conservative issue - and made it his own. Now, liberals are employing a similar tactic in promoting their health care agenda.

But Rep. Paul Ryan, R-Wisc., isn't having it. He called out Katrina vanden Heuvel, editor of the left wing The Nation magazine and MSNBC guest co-host, for attempting it in questioning him in a MSNBC segment on July 29. vanden Heuvel asked Ryan why he was against a so-called public health insurance option. His opposition, she reasoned, would deny consumers the choice of a public option in the marketplace.

"Rep. Ryan, that sounds like an anti-competitive vote," vanden Heuvel said. "Competition is at the heart of America and to deny Americans competition by denying them an option of a public plan seems to me un-American."

"ABC News has more than earned the title of the All Barack Channel, they have recklessly fought to achieve it," Media Research Center President Brent Bozell stated in a press release today.

The network had promised to deliver a health care presentation that would "not be ‘slanted' in any way - much less a ‘day-long infomercial' or ‘in-kind free advertising'," but not a single expert was offered to counter President Obama's plan to nationalize the nation's health care industry.

Instead, ABC News "balanced" itself this morning by having Wisconsin Rep. Paul Ryan (R-Wis.) on today's "Good Morning America" to discuss his health care ideas - for a 3 minute 5 second segment.  Ryan got less than 2 minutes (1 minute, 47 seconds) to respond to questions. Obama received 25 times that much time last night.

After GOP-less ObamaCare Special, ABC's Sawyer Chides McConnell and Steele for Not Coming on Thursday's 'GMA'

Apparently feeling some heat about its decision to not allow any Republicans to participate in its primetime ObamaCare infomercial Wednesday evening, ABC decided at the last minute to invite Senate Minority Leader Mitch McConnell (R-Ky.) and RNC Chairman Michael Steele on Thursday's "Good Morning America."

Unfortunately, both McConnell and Steele, having been given less than 24 hours notice, were not available, and the RNC suggested "GMA" contact Rep. Paul Ryan (R-Wi.), one of the GOP's leading voices on healthcare in the House.

Although Ryan was available, and did speak with Sawyer Thursday morning, the "GMA" co-host still felt the need to tell viewers McConnell and Steele declined her invitation (video embedded right):