I can't speak for anybody else but my wife and myself have been immersed in the Summer Olympic games from London the last few days.

Of course the athleticism has been incredible, the best planet earth has to offer and whether seasoned veteran or rookie they gave it their all, even the athletes who came to the games knowing that their chances of winning a medal were about as likely as growing wings, left nothing on the field of competition with the exception of a couple of shameful examples of jockeying for position by intentionally losing a preliminary match.

Washington Post columnist Paul Farhi on Saturday offered an obnoxious comparison for the widespread American patriotism on display during the just-ended Olympics: He brought up Hitler. Regarding the quest for gold medals, Farhi connected, "Certainly, America's current Olympic chauvinism (USA! USA!) is mild compared with Adolf Hitler's grotesque perversion of the 1936 Berlin Games or the long arc of the Cold War era."

(Well, it's a good thing America's "chauvinism" isn't quite as bad as Hitler.) The Post journalist seemed to want to have it both ways, acknowledging the prestige and advertising money U.S. viewers bring to the Olympics and at the same time worrying about how Chinese athletes "don’t get many humanizing breaks." Farhi lamented, "Bob Costas hasn’t been having them over for many post-game chats, nor is Visa likely to feature them in its golden-tinged commercials anytime soon."

Mitt Romney's week-long international trip resulted in unrelentingly negative coverage from the big three broadcast networks, a stark change from the glowing press awarded to then-candidate Barack Obama's world tour in 2008. While Obama was treated like a rock star (from the Associated Press: "It's not only Obama's youth, eloquence and energy that have stolen hearts across the Atlantic...."), Romney endured a focus on gaffes and the trivial.

MRC analysts examined all 21 ABC, CBS and NBC evening news stories about Romney's trip to London, Israel and Poland between July 25 and July 31. Virtually all of these stories (18, or 86%) emphasized Romney's "diplomatic blunders," from his "golden gaffe" at the Olympic games to "missteps" that offended the Palestinians. 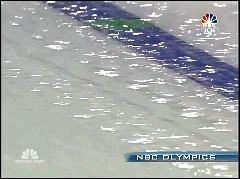 In a Tuesday NBC Nightly News story, reporter Ron Mott actually acknowledged that the decision to use “environmentally friendly” ice resurfacing machines “that kept breaking down” had led to lengthy delays for speed skating competitions at the Winter Olympics in Vancouver. In the piece on problems at the games, Mott reported:

Our own Managing Editor Ken Shepherd delivered earlier NBC's Chuck Todd analyzing the bad news that Chicago finished fourth out of four as a potential host site for the 2016 Olympics. This abject failure came despite a full-on push by both President Barack Obama and his First Lady Michelle, live and in person in Copenhagen, Denmark.

Despite all of this Presidential effort, Todd somehow arrived at the conclusion that the "the biggest political loser" was not Obama - but Chicago Mayor Richard Daley.  A man who roughly 95% of the country (conservatively) has never heard of in their lives is somehow a bigger political loser than the President.  A President who very publicly dropped everything to make a MUCH discussed trans-Atlantic jaunt to make the pitch for the Toddlin' Town.

This is a BIZARRE assessment. But Todd's explanation - in defense of his bizarreness - had him venturing further into the realm of the absurd.  He insisted that Mayor Daley basically ordered the White House - and the President specifically - to get involved on behalf of his Olympic effort (video below the fold).

If this is true, Todd is breaking some serious news here - that the titular head of the vaunted, notorious Chicago Political Machine can bend the White House to his will whenever he wishes.  Which would be more than a little disturbing.

And this after the media repeatedly assured us throughout last year's campaign of the incredible chasm that somehow miraculously existed between Obama and the Machine - despite Obama's career-long immersion in those fetid and festering waters.

Get a load of this: 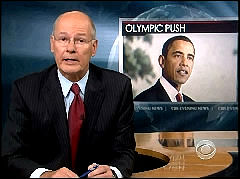 From his candidate days to earlier this month on the White House lawn, where he picked up some pointers on fencing, the President has established himself as a kind of Olympics super-fan. Now with Chicago locked in a tight battle with Tokyo, Madrid and Rio de Janeiro, and their heads of state making the trip to Copenhagen, the hometown pressure for Obama to go was intense.

ABC, which pointed out how “no President has ever made such an appeal,” even led with the development. “Olympic bid,” Charles Gibson teased, “the President decides to travel thousands of miles for a last-minute personal pitch, hoping to bring the 2016 Olympics to Chicago.”